Twin brothers Emil and Brighton have grown up wanting to be Celestials, hoping to one day inherit magical powers. With a youtube channel dedicated to magic powers, Brighton hasn’t quite let go of their childhood fantasies, but Emil has changed his dreams to advocating for phoenixes and other mythical creatures. So when Emil is the one to discover fire powers in the middle of a subway fight, Brighton is a tiny bit jealous. While Brighton struggles to prove himself, Emil tries to cope with new powers and responsibilities, all while trying to stop a murderous gang leader from gaining immortality.

Adam Silvera did not disappoint with Infinity Son. Taking place in modern day New York City, it’s a cross between a superhero novel and a fantasy novel, similar tropes to superheroes, but still has the mythical creatures and fantastical elements.

To start off, I love the modern day element of Infinity Son. I thought the politics were particularly interesting, showing how magic might be treated in society today. It’s also fun to read about how normal people use their powers and what people who don’t have powers think about them.

Silvera did a good job of writing realistic characters. The characters have powers, but aren't overpowered. Even the most powerful characters are beatable. The fight scenes are suspenseful because there is a possibility that the good side will lose, and they actually do frequently. Aside from the powers, he also gives the characters sensible emotions. Brighton especially, he gets jealous and upset when he feels he’s being overlooked or underestimated, but he isn’t portrayed as evil just because he feels negative emotions and is still a lovable character with good attributes. The other characters argue and get upset with each other unreasonably sometimes, giving more weaknesses to characters that could easily be overpowered. 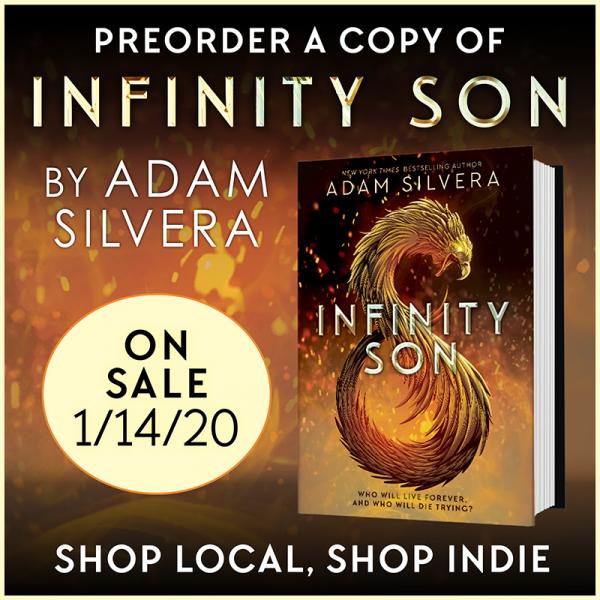 The world building was very well thought out, but specifically the way that magic is viewed and the way that it’s handled by the police was a great touch to the world. Celestials are either vilified or glorified by people without powers, and the problems with each are shown. At some point in the story both sides give issues to the protagonists. Adding crime rings and other criminals into the magical realm felt very unique in the way that it was written. A black market for mythical creatures and making magical drugs added a very gritty element to the story, and gave more background for some of the villains.

I don’t have any complaints about Infinity Son other than some of the writing during fight scenes. It was hard to tell what was going on in a couple of the scenes. There were a couple of times where there seemed to be pauses in battles for two characters to talk. I think there was supposed to still be things going on around the characters, or maybe the space where the fight was taking place was really big so they had space, but it felt a bit stilted.

I enjoyed Infinity Son, I’ll definitely be reading the next book. The characters and world building itself is worth sticking around for, but also I need some closure for the ending... I’d rate Infinity Son a 4.5/5, and I would recommend it to any fantasy lover.