Review: What Makes Us by Rafi Mittelfeldt 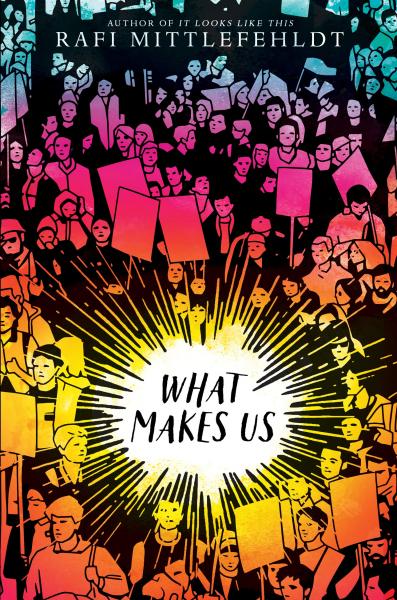 "Eran Sharon is passionate, maybe a little too passionate. He is quick to anger and always seems to escalate any situation he’s in. After a video of him pushing a man at a protest goes viral, the press is quick to discover that the father Eran has never met was a terrorist. While news vans and reporters pile up at his door, Eran is left wondering if extremism is hereditary or if he has a chance to be different from his father.

What Makes Us is the type of book that will make you think. It brings up the classic nurture/nature debate, asks if violent protest is different from terrorism, shows how media twists reality, etc. It definitely added an extra layer to the book, making the reader wonder alongside the characters about where they stand on these issues.

Rafi Mittlefehldt sometimes shifts into second person in his writing, which also added a level of connection to the characters. He makes the reader look through the eyes of his characters and see their perspective on issues. It made it easy to empathize with the characters.

Eran’s character development felt very realistic. His development doesn’t start out of nowhere, there are a couple of triggers that spurr him forward along the way. Mittlefehldt shows him thinking about how he acts and how he wants to act as he works to control his anger. I appreciated how Eran slips up a couple of times before he starts to improve and still isn’t perfect by the end of the book. Sometimes it feels like YA books either have no character development or the character develops out of nowhere and is suddenly perfect by the end of the book, so having a book that actually had realistic development was a pleasant surprise.

To nitpick, some points in the book that were written to be giant shocking moments fell a bit flat. I think it might be because there were so many moments that were supposed to feel surprising that it wasn’t anymore. Some of the less important points were a tiny bit overwritten too, which might have contributed to that.

Overall, I really enjoyed What Makes Us. It was easy to get into, and the characters were likeable. The beginning reminded me of Anger is a Gift and the rest—especially Mittlefehldt’s writing style—reminded me of Picture Us In the Light. I’d give What Makes Us a solid ⅘ and I would recommend it to people who want a realistic book that deals with difficult issues without being too sad.

What Makes Us (Hardcover)