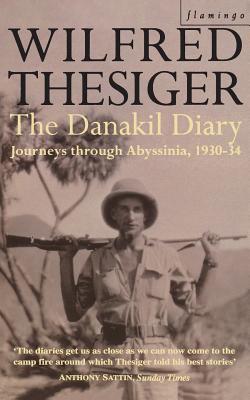 The earliest and most influential expeditions of the man now considered to be the greatest living explorer.

The Danakil Diary is the account of two journeys Thesiger made into the Danakil country in Abyssinia, now Ethiopia, in 1930-34 at the age of 24 - which, today, he still regards as the most dangerous he undertook.

It was an extraordinary journey and a remarkable achievement. Thesiger succeeded in penetrating country that had wiped out two Italian expeditions and an Egyptian army before him, discovered what happened to the Awash River (one of the area's last geographical mysteries to be solved) and managed to survive amongst the Danakil tribesmen, to whom a man's status depended on the number of men he had killed and castrated.

Besides giving early proof of Thesiger's descriptive genius - with his portrayal of the beautiful, savage landscapes, and their varied wildlife - The Danakil Diary reveals youthful evidence of his fierce motivation and uncompromising will, which are familiar hallmarks of his sixty years of travel among primitive peoples in some of the harshest and remotest areas of the world.

The Danakil journeys were Thesiger's first major expeditions. He served during the war with the SAS and was awarded the DSO. He has travelled in Southern Arabia, Kurdistan, Iraq, the Hindu Kush, the Karakorams, Morocco, Abyssinia, Kenya and Tanganyika. His journeys have won him many medals, and in 1968 he was made CBE. He was honoured with a KBE in 1995.