Tyranny of the Majority: Funamental Fairness in Representative Democracy (Paperback) 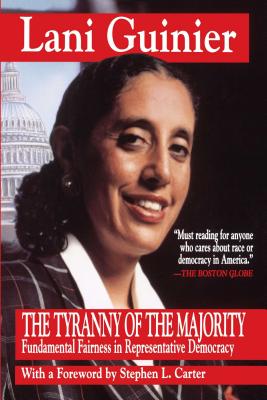 Tyranny of the Majority: Funamental Fairness in Representative Democracy (Paperback)


Available in Warehouse. Wait for Email Confirmation for ETA
At last...the public hearing she was denied...These essays reveal keen powers of analysis applied to some of the most obdurate problems that bedevil electoral politics. Anyone who cares about the mechanisms of democracy should be engaged by her tough-minded explorations. It doesn't matter where you think you stand: it's all here, to argue or agree with.
-- Henry Louis Gates, Jr.
Lani Guinier's fascinating book is a prophetic intervention into a public conversation we desperately need to rejuvenate. There is no doubt that her powerful voice will produce good consequences for our nation and world.
-- Cornel West, Author of Race Matters
Intriguing and desperately needed...
-- The San Francisco Chronicle
Lani Guinier was the first woman of color appointed to a tenured professorship at Harvard Law School in 1998. In the 1980s, she served as a lawyer with the NAACP Legal Defense Fund and was the Special Assistant to the Assistant Attorney General for Civil Rights during the Carter Administration. She has published Becoming Gentlemen, Lift Every Voice, and The Miner’s Canary.