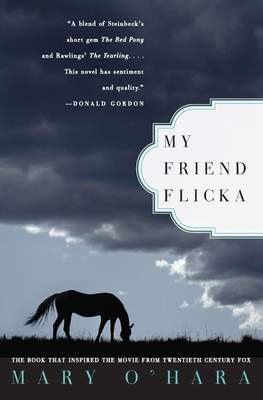 “A blend of Steinbeck’s short gem, The Red Pony, and Rawling’s The Yearling. . . . This novel has sentiment and quality.”— Donald Gordon

A timeless favorite of adults and children alike, My Friend Flicka resides in “that borderland where some of the best-loved books in the English tongue hold their immortality.” (New York Herald Tribune)

A daydreamer and a time waster, young Ken McLaughlin spends his days on his family's Wyoming ranch with his head in the clouds, surrounded by endless blue skies, wide-open spaces, and beautiful horses. To his brusque, practical father, the boy is an enigma and a disappointment. Then one day, Ken's life is filled with new purpose when he finds Flicka, a magnificent filly as wild as she is fast.

Though the strong bond between boy and horse only fuels his father's disdain, Ken's growing love for his friend Flicka is changing him—leading a once-aimless young man down the path to responsible adulthood, forging a new respect and understanding between father and son, and inspiring a fierce loyalty that nearly costs Ken his life.

Mary O’Hara was born on July 10, 1885, in Cape May Point, New Jersey. She was a screenwriter during the silent film era and wrote several novels, including the range country trilogy My Friend Flicka, Thunderhead, and Green Grass of Wyoming. She also authored a novella, The Catch Colt, and Wyoming Summer, based on her diary of sixteen years. She died on October 14, 1980.

"A beautiful book....It will pass into that borderland where some of the best-loved books in the English tongue hold their immortality, on the shelf with Treasure Island, and Dumas and Dickens, and Mutiny on the Bounty.” — New York Herald Tribune

“A blend of Steinbeck’s short gem, The Red Pony, and Rawling’s The Yearling....This novel has sentiment and quality.” — Donald Gordon