The Genius in the Design: Bernini, Borromini, and the Rivalry That Transformed Rome (Paperback) 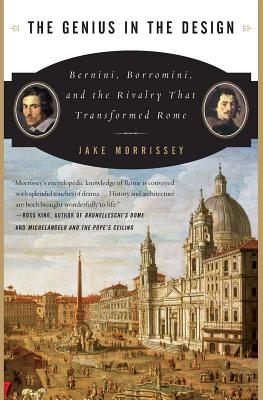 The Genius in the Design: Bernini, Borromini, and the Rivalry That Transformed Rome (Paperback)

The rivalry between the brilliant seventeenth-century Italian architects Gianlorenzo Bernini and Francesco Borromini is the stuff of legend. Enormously talented and ambitious artists, they met as contemporaries in the building yards of St. Peter's in Rome, became the greatest architects of their era by designing some of the most beautiful buildings in the world, and ended their lives as bitter enemies. Engrossing and impeccably researched, full of dramatic tension and breathtaking insight, The Genius in the Design is the remarkable tale of how two extraordinary visionaries schemed and maneuvered to get the better of each other and, in the process, created the spectacular Roman cityscape of today.

Jake Morrissey has studied and written about architecture for twenty years. His work has appeared in the Washington Post, Chicago Tribune, San Francisco Chronicle, and dozens of other publications and books. He is the author of the novel A Weekend at Blenheim and lives near New York City.

“In clear prose and with splendid touches of drama, history and architecture are both brought wonderfully to life. — Ross King, author of the New York Times bestsellers BRUNELLESCHI'S DOME and MICHELANGELO AND THE POPE'S CEILING

“GENIUS IN THE DESIGN reveals the dark side of 17th Century Italy with sparkling anecdotes and you-are-there immediacy” — Laurence Bergreen, author of OVER THE EDGE OF THE WORLD

“Fascinating . . . a scintillating introduction to the Baroque. It is a splendid read — Iain Pears, author of the New York Times bestseller, AN INSTANCE OF THE FINGERPOST

“[Morrissey] succeeds. His descriptions of the men’s passions and their art and architecture make for page-turning reading.” — Seattle Times Book Review

“Morrissey illuminates the contrast between the celebrated Bernini and the anguished Borromini.” — Boston Globe