The Last Week: What the Gospels Really Teach About Jesus's Final Days in Jerusalem (Paperback) 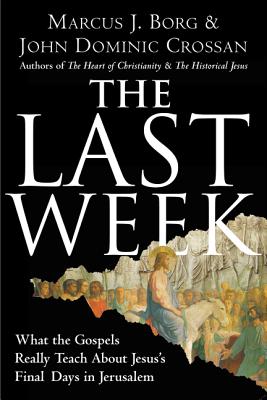 The Last Week: What the Gospels Really Teach About Jesus's Final Days in Jerusalem (Paperback)

Top Jesus scholars Marcus J. Borg and John Dominic Crossan join together to reveal a radical and little-known Jesus. As both authors reacted to and responded to questions about Mel Gibson's blockbuster The Passion of the Christ, they discovered that many Christians are unclear on the details of events during the week leading up to Jesus's crucifixion.

Using the gospel of Mark as their guide, Borg and Crossan present a day-by-day account of Jesus's final week of life. They begin their story on Palm Sunday with two triumphal entries into Jerusalem. The first entry, that of Roman governor Pontius Pilate leading Roman soldiers into the city, symbolized military strength. The second heralded a new kind of moral hero who was praised by the people as he rode in on a humble donkey. The Jesus introduced by Borg and Crossan is this new moral hero, a more dangerous Jesus than the one enshrined in the church's traditional teachings.

The Last Week depicts Jesus giving up his life to protest power without justice and to condemn the rich who lack concern for the poor. In this vein, at the end of the week Jesus marches up Calvary, offering himself as a model for others to do the same when they are confronted by similar issues. Informed, challenged, and inspired, we not only meet the historical Jesus, but meet a new Jesus who engages us and invites us to follow him.

Marcus J. Borg (1942–2015) was a pioneering author and teacher whom the New York Times described as "a leading figure in his generation of Jesus scholars." He was the Hundere Distinguished Professor of Religion and Culture at Oregon State University and canon theologian at Trinity Episcopal Cathedral in Portland, and he appeared on NBC's The Today Show and Dateline, ABC's World News, and NPR's Fresh Air. His books have sold over a million copies, including the bestselling Meeting Jesus Again for the First Time, Reading the Bible Again for the First Time, Jesus, The Heart of Christianity, Evolution of the Word, Speaking Christian, and Convictions.

John Dominic Crossan, professor emeritus at DePaul University, is widely regarded as the foremost historical Jesus scholar of our time. He is the author of several bestselling books, including The Historical Jesus, How to Read the Bible and Still Be a Christian, God and Empire, Jesus: A Revolutionary Biography, The Greatest Prayer, The Last Week, and The Power of Parable. He lives in Minneola, Florida.

“If there is…one book for the redemption of Holy Week, this is it. A must read.” — Peter J. Gomes, Harvard University

“[...] Borg and Crossan show one of the most careful and insightful readings of the Bible I’ve ever come across.” — Brian McLaren, author of A New Kind of Christian

“It is difficult to overestimate the importance of this volume[...]” — Barbara Brown Taylor, author of Leaving Church and Preaching Life

“Borg and Crossan brilliantly chronicle the tension that forced everyone to pledge allegiance -- either to Rome or to Jesus.” — Los Angeles Times

“A readable and attractive reinterpretation of Jesus’ death and resurrection. . . .” — Houston Chronicle