The Fair Tax Book: Saying Goodbye to the Income Tax and the IRS (Paperback) 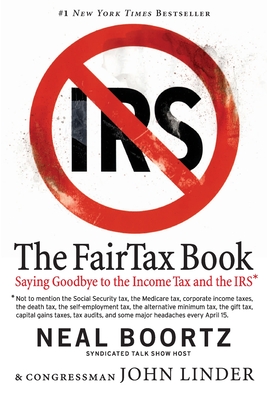 The Fair Tax Book: Saying Goodbye to the Income Tax and the IRS (Paperback)

Wouldn’t you love to abolish the IRS . . .Keep all the money in your paycheck . . .Pay taxes on what you spend, not what you earn . . .And eliminate all the fraud, hassle, and waste of our current system?

Then the FairTax is for you.

In the face of the outlandish American tax burden, talk-radio firebrand Neal Boortz and Congressman John Linder are leading the charge to phase out our current, unfair system and enact the FairTax Plan-replacing the federal income tax and withholding system with a simple 23 percent retail sales tax. This dramatic revision of the current system, which would eliminate the reviled IRS, has already caught fire in the American heartland, with more than 600,000 taxpayers signing on in support of the plan.

As Boortz and Linder reveal in this first book on the FairTax, this radical but eminently sensible plan would end the annual national nightmare of filing income tax returns, while at the same time enlarging the federal tax base by collecting sales tax from every retail consumer in the country. The FairTax, they argue, would transform the fearsome bureaucracy of the IRS into a more transparent, accountable—and equitable—tax collection system. Endorsed by scores of leading economists—and supported by a huge and growing grassroots movement—the FairTax Plan could revolutionize the way America pays for itself.

The host of radio's The Neal Boortz Show, syndicated in nearly two hundred national markets, Neal Boortz is the author (with Congressman John Linder) of the New York Times bestsellers The FairTax Book and FairTax: The Truth, and author of The Terrible Truth About Liberals. He has been nominated twice for the National Association of Broadcasters' Marconi Award and divides his time between Atlanta, Georgia, and Naples, Florida.

Congressman John Linder (R-Ga) is a longtime champion of tax reform and the primary sponsor of the FairTax Act. He divides his time between Duluth, Georgia, and Washington, D.C.