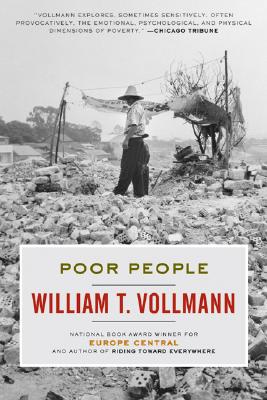 That was the simple yet groundbreaking question William T. Vollmann asked in cities and villages around the globe. The result of Vollmann's fearless inquiry is a view of poverty unlike any previously offered.

Poor People struggles to confront poverty in all its hopelessness and brutality, its pride and abject fear, its fierce misery and quiet resignation, allowing the poor to explain the causes and consequences of their impoverishment in their own cultural, social, and religious terms. With intense compassion and a scrupulously unpatronizing eye, Vollmann invites his readers to recognize in our fellow human beings their full dignity, fallibility, pride, and pain, and the power of their hard-fought resilience.

William T. Vollmann is the author of seven novels, three collections of stories, and a seven-volume critique of violence, Rising Up and Rising Down. He is also the author of Poor People, a worldwide examination of poverty through the eyes of the impoverished themselves; Riding Toward Everywhere, an examination of the train-hopping hobo lifestyle; and Imperial, a panoramic look at one of the poorest areas in America. He has won the PEN Center USA West Award for Fiction, a Shiva Naipaul Memorial Prize and a Whiting Writers' Award. His journalism and fiction have been published in The New Yorker, Esquire, Spin and Granta. Vollmann lives in Sacramento, California.