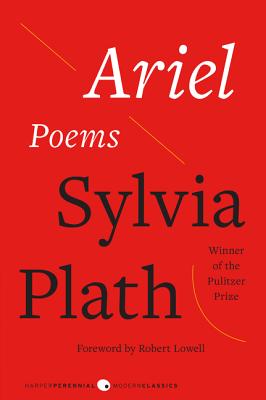 "Sylvia Plath's last poems have impressed themselves on many readers with the force of myth. They are among the handful of writings by which future generations will seek to know us and give us a name." — The Critical Quarterly

When Sylvia Plath died, she not only left behind a prolific oeuvre but also her unpublished literary masterpiece, Ariel. Ted Hughes helped bring the collection to life in 1966, and its publication garnered worldwide acclaim. This collection showcases the beloved poet’s brilliant, provoking, and always moving poems, including "Ariel," "The Applicant," "Lady Lazarus," and "Edge", and once again shows why readers have fallen in love with her work over generations.

Sylvia Plath was born in 1932 in Massachusetts. Her books include the poetry collections The Colossus, Crossing the Water, Winter Trees, Ariel, and Collected Poems, which won the Pulitzer Prize. A complete and uncut facsimile edition of Ariel was published in 2004 with her original selection and arrangement of poems. She was married to the poet Ted Hughes, with whom she had a daughter, Frieda, and a son, Nicholas. She died in London in 1963.

"In these poems...Sylvia Plath becomes herself, becomes something imaginary, newly, wildly and subtly created." — Robert Lowell

"Sylvia Plath's last poems have impressed themselves on many readers with the force of myth. They are among the handful of writings by which future generations will seek to know us and give us a name." — The Critical Quarterly

"One of the most marvelous volumes of poetry published for a very long time." — Times Literary Supplement

"It is fair to say that no group of poems since Dylam Thomas's Deaths and Entrances has had as vivid and disturbing an impact on English critics and readers as has Ariel. Sylvia Plath's poems have already passed into legend as both representative of our present tone of emotional life and unique in their implacable, harsh brilliance...These poems take tremendous risks, extending Sylvia Plath's essentially austere manner to the very limit. They are a bitter triumph, proof of the capacity of poetry to give to reality the greater permanence of the imagined. She could not return from them." — George Steiner, The Reporter