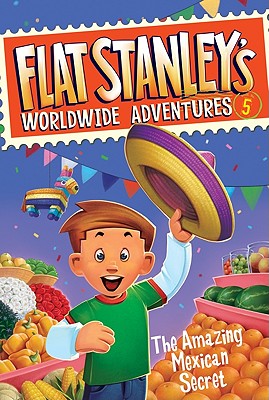 Flat Stanley is taking over the world, one city at a time! In this fantastic fifth installment in the renowned Flat Stanley’s Worldwide Adventures chapter book series, Stanley, the flattest kid on Earth, gets mailed to Mexico!

When Stanley's mother needs the secret ingredient for a special recipe, Stanley mails himself to Mexico to track down its mysterious maker. But when a band of spies threatens to steal the secret, Stanley's simple trip becomes a race against an opponent that even a flat boy like himself can't slip past!!

This unforgettable adventure features fun, fascinating facts about Mexico! And for parents and teachers, each Flat Stanley book is aligned to the Common Core State Standards, like multicultural adventure, plot and character development story elements, and compare and contrast! Don’t miss any of Flat Stanley’s worldwide adventures!

Macky Pamintuan is an accomplished artist who lives in the Philippines with his wife, Aymone; their baby girl, Alison; and a West Highland white terrier named Winter.