Jungleland: A Mysterious Lost City and a True Story of Deadly Adventure (Paperback) 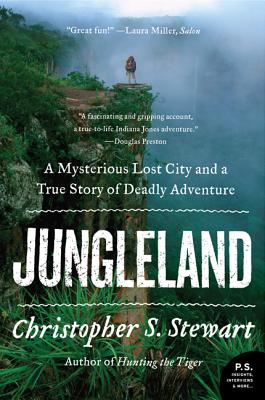 Jungleland: A Mysterious Lost City and a True Story of Deadly Adventure (Paperback)

For fans of The Lost City of Z, The River of Doubt, and Lost in Shangri-La—a real-life Indiana Jones story, set in the mysterious jungles of Honduras.

"I began to daydream about the jungle...."

On April 6, 1940, explorer and future World War II spy Theodore Morde (who would one day attempt to assassinate Adolf Hitler), anxious about the perilous journey that lay ahead of him.

Deep inside “the little Amazon,” the jungles of Honduras’s Mosquito Coast—one of the largest, wildest, and most impenetrable stretches of tropical land in the world—lies the fabled city of Ciudad Blanca: the White City. For centuries, it has lured explorers, including Spanish conquistador Herman Cortes. Some intrepid souls got lost within its dense canopy; some disappeared. Others never made it out alive. Then, in 1939, Theodore Morde claimed that he had located this El Dorado-like city. Yet before he revealed its location, Morde died under strange circumstances, giving credence to those who believe that the spirits of the Ciudad Blanca killed him.

In Jungleland, Christopher S. Stewart seeks to retrace Morde's steps and answer the questions his death left hanging. Is this lost city real or only a tantalyzing myth? What secrets does the jungle hold? What continues to draw explorers into the unknown jungleland at such terrific risk? In this absorbing true-life thriller, journalist Christopher S. Stewart sets out to find answers—a white-knuckle adventure that combines Morde’s wild, enigmatic tale with Stewart’s own epic journey to find the truth about the White City.

Christopher S. Stewart is an investigative reporter at the Wall Street Journal, where he shared a 2015 Pulitzer Prize for Investigative Reporting. His work has appeared in GQ, Harper’s, New York Times Magazine, New York, The Paris Review, Wired, and other publications, and he also served as deputy editor at the New York Observer and is a former contributing editor at Condé Nast Portfolio. Stewart is the author of Hunting the Tiger and Jungleland. He lives with his family in New York.

“This stunning book takes you deep into the jungles of Honduras, telling a story that explains all of Europe’s adventures on this side of the world: the quest for a lost city full of gold, a search that, in theend, reveals the treasure to be the journey itself. ” — Rich Cohen

“A bold attempt to solve the mystery of the White City of Honduras and finish the work of a World War II spy.… a rip-snorting journey… Readers who loved ‘The Lost City of Z’ have found their next great true adventure.” — Mitchell Zuckoff

“I dare you to put this book down.” — Evan Wright

“A great revival of an older genre, the treasure hunt, and associated adventures.” — Kirkus Reviews

“The premise is so fantastic that if Jungleland were a novel, you could be forgiven for worrying that it might be a bit pulpy or clichéd…The fact that this is all true turns the story from one of intrigue and odyssey into one of anthropological significance as well.” — Daily Beast

“The true story [of] Jungleland resembles nothing so much as the set-up for one of H. Rider Haggard’s old pulp adventure novels.…Stewart is a crisp, lean, colorful stylist, with that essential knack: a nose for punchy, telling anecdotes and images…great fun to read.” — Laura Miller, Salon

“[T]his is a gritty, remarkable tale of exploration and risk in a nervy trek to the edge of civilization.” — Publisher's Weekly (Starred Review)