Crossing the Heart of Africa: An Odyssey of Love and Adventure (Paperback) 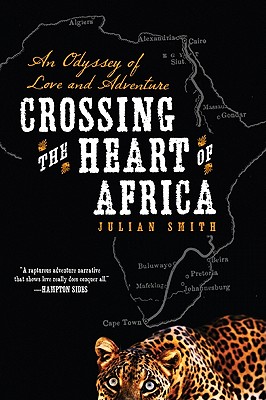 Crossing the Heart of Africa: An Odyssey of Love and Adventure (Paperback)

The spellbinding true story of retracing the extraordinary trek of Ewart "the Leopard" Grogan—the legendary British explorer who, in order to win the woman he loved, attempted to become the first person to cross Africa

In 1898 the dashing British adventurer Ewart Grogan fell head-over-heels in love—but before he could marry, he needed the approval of his beloved's skeptical, aristocratic stepfather. Grogan, seeking to prove his worth and earn his love's hand, then set out on an epic quest to become the first man to cross the entire length of Africa, from Cape Town to Cairo, "a feat hitherto thought by many explorers to be impossible" (New York Times).

A little more than a century later, American journalist Julian Smith also found himself madly in love with his girlfriend of seven years... but he was terrified by the prospect of marraige. Inspired by Grogan's story, which he discovered by chance, Smith decided to face his fears of commitment by retracing the explorer's amazing—but now forgotten—4,500-mile journey for love and glory through Africa. Crossing the Heart of Africa is the unforgettable account of these twin adventures, as Smith beautifully ineterweaves his own contemporary journey with Grogan's larger-than-life tale of cannibal attacks, charging elephants, deadly jungles, and romantic triumph.

JULIAN SMITH received a Banff Mountain Book Award and a Lowell Thomas Travel Journalism Award for Crossing the Heart of Africa: An Odyssey of Love and Adventure. The coauthor of Smokejumper: A Memoir by One of America's Most Select Airborne Firefighters, he has written for Smithsonian, National Geographic Traveler, Wired, Outside, and the Washington Post, among other publications. Julian lives in Portland, Oregon.

“Grogan would have been a fitting protagonist for Shakespeare ... an insightful and often uproarious romp. ... memorable ... sheds light on Grogan’s monumental feat, which is worthy of a revisit.” — Boston Globe

“Julian Smith, a talented travel writer, evokes Grogan, his adventures and his world with both insight and panache.” — Washington Post