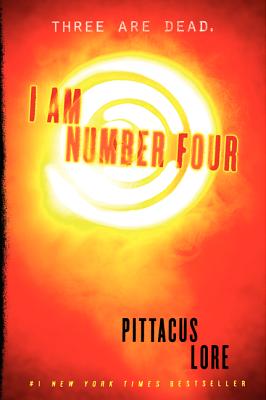 This is book number 1 in the Lorien Legacies series.

“John Smith arrives in Paradise Ohio and hopes that this will finally be the place where he settle down and be a normal teenager. This isn't so easy considering he's an alien developing supernatural powers on the run from the Mogadorians who have destroyed his home planet and are hunting him down along with the eight other surviving Loriens. A novel that hits the ground running and doesn't let up until the very end, this first book in the Lorien Legacies will cause readers to stop and think: do they really live among us?”
— Grace Firari, The Velveteen Rabbit Bookshop, Fort Atkinson, WI

The first book of the #1 New York Times bestselling series and the inspiration for the hit movie from Dreamworks!

Nine Loric children were sent to Earth to live in hiding until they grew up and developed their Legacies, powers that would help them fight back—and help them save us. Three of them are now dead. John is Number Four, and he knows he’s next….

Michael Bay, director of Transformers, raved: “Number Four is a hero for this generation.” This epic story is perfect for fans of action-packed science fiction like The 5th Wave series by Rick Yancey, The Maze Runner series by James Dashner, and Orson Scott Card’s Ender’s Game.

Don’t miss the first book in the brand-new I Am Number Four spin-off series: Generation One.

Pittacus Lore is Lorien's ruling Elder. He has been on Earth preparing for the war that will decide Earth's fate. He finished recounting the story of the invasion of Earth in the I Am Number Four series and is now ready to tell another story. His whereabouts are unknown.

“Number Four is a hero for this generation.” — Michael Bay, director of Transformers

“There’s genuine suspense…it’s easy to get lost in the world of the sweet teen from another planet.” — Chicago Tribune

“This is a can’t-put-it-down book.” — Justine Magazine

“The intense pace, bigger-than-life fight scenes, and good vs. evil showdown set up a series that will easily draw in action-oriented sci-fi fans, who will eagerly await the next round.” — Bulletin of the Center for Children’s Books