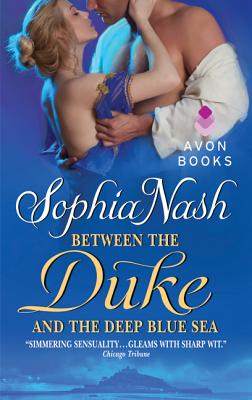 This is book number 1 in the Royal Entourage series.

Set the hit comedy, The Hangover, in England’s Regency Era and what do you get?  Between the Duke and the Deep Blue Sea, the first book in RITA Award-winner Sophia Nash’s wickedly clever and wonderfully sensual Royal Entourage series. The author of Secrets of a Scandalous Bride, which was named by Booklist as one of the “Top Ten Romances of the Year,” Nash delights readers once again by following the romantic exploits of the rogues of the royal entourage after a night of unheralded, and mostly unremembered, extravagance. Karen Hawkins, Elizabeth Boyle, and Victoria Alexander fans will be thrilled with this tantalizing tale of a duke exiled from London for certain undukelike behavior he cannot recall who stumbles into even more trouble when he is instantly captivated by an imperiled beauty he discovers hanging off of a cliff.

Sophia Nash was born in Switzerland and raised in France and the United States, but says her heart resides in Regency England. Her ancestor, an infamous French admiral who traded epic cannon fire with the British Royal Navy, is surely turning in his grave.

Before pursuing her long-held dream of writing, Sophia was an award-winning television producer for a CBS affiliate, a congressional speechwriter, and a nonprofit CEO. She lives in the Washington, D.C., suburbs with her husband and two children.

Sophia's novels have won twelve national awards, including the prestigious RITA® Award, and two spots on Booklist's "Top Ten Romances of the Year."

“Nash not only adds more sensual passion to the traditional Regency format but also integrates some serious themes into her superbly constructed story. Graced with exquisitely nuanced protagonists and amusing secondary characters, this emotionally satisfying romance is a rare treat.”
— Booklist on A Passionate Endeavor/Signet

“Graced with empathetic characters, emotional intricacy, and unexpected plot twists, this final book in the ‘Widows Club’ series ties up a variety of loose ends and is a perfectly delicious series finale.”
— Library Journal (starred review) on Secrets of a Scandalous Bride

“Nash soars to new literary heights with her latest flawlessly crafted novel, which delivers an abundance of addictively acerbic and often laugh-out-loud humor, an exceptionally entertaining cast of supporting characters, and a superbly sexy romance between a perfectly matched pair of protagonists.”
— Booklist (starred review)