The Other Civil War: Slavery and Struggle in Civil War America (Paperback) 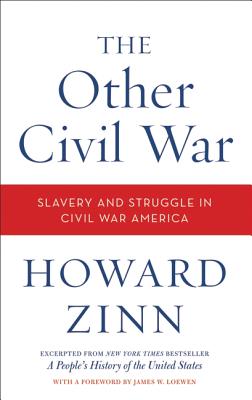 The Other Civil War: Slavery and Struggle in Civil War America (Paperback)

The Other Civil War offers historian and activist Howard Zinn's view of the social and civil background of the American Civil War--a view that is rarely provided in standard historical texts. Drawn from his New York Times bestseller A People's History of the United States, this set of essays recounts the history of American labor, free and not free, in the years leading up to and during the Civil War. He offers an alternative yet necessary account of the terrible nation-defining speech.

Howard Zinn (1922–2010) was a historian, playwright, and social activist. In addition to A People’s History of the United States, which has sold more than two million copies, he is the author of numerous books including The People Speak, Passionate Declarations, and the autobiography, You Can’t Be Neutral on a Moving Train.

“[A People’s History of the United States is] one of the most important books I have ever read in a long life of reading...It’s a wonderful, splendid book--a book that should be read by every American, student or otherwise, who wants to understand his country, its true history, and its hope for the future.”
— Howard Fast

“Professor Zinn writes with an enthusiasm rarely encountered in the leaden prose of academic history, and his text is studded with telling quotations from labor leaders, war resisters and fugitive slaves. . . . [It] should be required reading.”
— Eric Foner, New York Times Book Review

"Howard Zinn's work literally changed the conscience of a generation. And the series of 'people's histories' derived from this great work have provided new understanding of who we are and what we should aspire to be."
— Noam Chomsky

"A brilliant and moving history of the American people."
— Library Journal

"A brilliantly written story about the U.S. through the lives of those too often overlooked."
— Time magazine