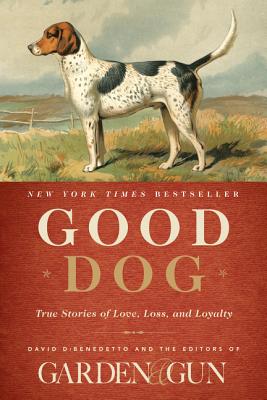 By Editors of Garden and Gun, David DiBenedetto

This is book number 2 in the Garden & Gun Books series.

When Garden & Gun magazine debuted a column aptly named “Good Dog,” it quickly became one of the publication’s most popular features in print. Now, Editor-in-Chief David DiBennedetto (proud owner of a Boykin spaniel) and the editors of G&G have gathered the most memorable stories, as well as original pieces, in this collection of essays written by some of most notable dog owners in literature and journalism.

Good Dog offers memorable, beautifully written stories of dog ownership, companionship, friendship, and kinship. From the troublemakers who can’t be fenced in to the lifelong companions who won’t leave our sides, this poignant anthology showcases man’s best friend through all of his most endearing—and sometimes maddening—attributes. By turns inspirational and humorous (just like the dogs we love), Good Dog is a must-have collection for dog lovers everywhere.

Garden & Gun is a national magazine that covers the best of the South, including its sporting culture, food, music, art, and literature, and its people and their ideas. The magazine has won numerous awards for journalism, design, and overall excellence, and its two previous books, The Southerner's Handbook and Good Dog, were New York Times bestsellers.

David DiBenedetto is the editor in chief of Garden & Gun magazine and the former editor of Salt Water Sportsman. His writing has appeared in numerous publications and has been anthologized in The Best American Sports Writing and Take Me Fishing: 50 Great Writers on their Favorite Sport. He lives in Charleston, South Carolina, with his wife, Jenny, and their two children.

“A sparkling collection of 51 dog stories… this selection of vignettes is varied, entertaining and frequently heartwarming.” — Kirkus Reviews

“The pieces run the gamut from heart-wrenching to hilarious… this is a wonderful compilation of well-written short narratives covering all aspects of life with dogs.” — Library Journal

“A heartwarming collection that will please even the diehard cat-lovers among us.” — Publishers Weekly