Mighty Truck: The Traffic Tie-Up (I Can Read Level 1) (Paperback) 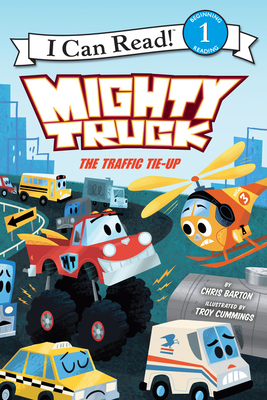 Mighty Truck: The Traffic Tie-Up (I Can Read Level 1) (Paperback)

Clarence was just a muddy pickup. One day, there was a big storm and Lightning zapped the car wash. Now Clarence has a secret: Water turns him into MIGHTY TRUCK!

Everyone has a job to do in Axleburg. Stella’s job is to be a news chopper and ﬂy high in the sky to loudly report what she sees. But Stella is loud all the time, and Clarence cannot stand it!

Clarence and his friends teach Stella to use her inside voice by speaking wheely softly and only letting her engines purr. Stella learns to use her inside voice, only she uses it outside, too! When Stella is too quiet to report the traffic on the morning rush, there’s only one truck who can turn up the volume and save the day: Mighty Truck!

Mighty Truck: Traffic Tie-Up is a Level One I Can Read book, which means it’s perfect for children learning to sound out words and sentences.

Troy Cummings has written and illustrated a number of books, including the Mighty Truck series, Giddy-Up, Daddy!, and the Notebook of Doom series. He lives in Greencastle, Indiana, with his nice family and mean cat.