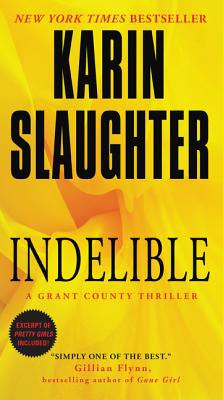 The fourth book in the Grant County series from Karin Slaughter, the New York Times bestselling author of Pieces of Her.

“[A] page-turner . . . Slaughter’s plot has more twists than a Slinky factory and the characters’ relationships are sharply drawn.”—People, starred review

An officer is shot point blank in the police station lobby and sherrif Jeffrey Tolliver is wounded, setting off a terrifying hostage situation with medical examiner Sara Linton at the center. It’s up to Lena Adams and Frank Going back and forth between present and past,

The narrative takes place in two time frames: present and ten years prior to the shooting. The “present” narration evolves over one hour; the “past” takes place over the course of a week. Lena will primarily get the present narration, working outside the station with Frank trying to figure out who the shooter is and how to resolve the hostage situation. Inside the station, Jeffrey has not been fatally wounded, but Sara knows he could easily die if the bleeding is not stopped. He drifts in and out of consciousness and through Sara and Jeffrey we get the past, and the case that leads up to the present day shooting.

Karin Slaughter is the author of more than twenty instant New York Times bestselling novels, including the Edgar–nominated Cop Town and standalone novels The Good Daughter, Pretty Girls, and Girl, Forgotten. She is published in 120 countries with more than 40 million copies sold across the globe. Pieces of Her is a #1 Netflix original series starring Toni Collette. The Will Trent Series will air on ABC in 2023, and The Good Daughter and False Witness are in development for film/tv. Slaughter is the founder of the Save the Libraries project—a nonprofit organization established to support libraries and library programming. A native of Georgia, she lives in Atlanta.

“A fearless writer. One of the boldest thriller writers working today.” — Tess Gerritsen

“Her characters, plot, and pacing are unrivaled among thriller writers.” — Michael Connelly