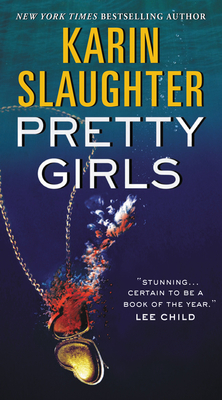 “I was grabbed from the first page of Slaughter's latest and roped in on the second. Boldly written and at times very raw, this psychological thriller is as suspenseful as it is scary. Dangerous secrets reunite two sisters who have been estranged since their older sister went missing 20 years earlier. As they search to discover what happened, they uncover evidence of her brutal murder and true evil. It is a gifted writer who can make you adore a character at the beginning of a book and loathe the same character at the end. Slaughter, author of both the Grant County and Will Trent series, has done just that in her newest stand-alone thriller.”
— Nancy McFarlane (E), Fiction Addiction, Greenville, SC

Lee Child says it’s “stunning… certain to be a book of the year.”

Jeffery Deaver says that “fiction doesn't get any better than this.”

See for yourself what these #1 New York Times-bestselling authors are talking about.

More than twenty years ago, Claire and Lydia’s teenaged sister Julia vanished without a trace. The two women have not spoken since, and now their lives could not be more different. Claire is the glamorous trophy wife of an Atlanta millionaire. Lydia, a single mother, dates an ex-con and struggles to make ends meet. But neither has recovered from the horror and heartbreak of their shared loss—a devastating wound that's cruelly ripped open when Claire's husband is killed.

The disappearance of a teenage girl and the murder of a middle-aged man, almost a quarter-century apart: what could connect them? Forming a wary truce, the surviving sisters look to the past to find the truth, unearthing the secrets that destroyed their family all those years ago . . . and uncovering the possibility of redemption, and revenge, where they least expect it.

Powerful, poignant, and utterly gripping, packed with indelible characters and unforgettable twists, Pretty Girls is a masterful novel from one of the finest writers working today.

Karin Slaughter is the author of more than twenty instant New York Times bestselling novels, including the Edgar–nominated Cop Town and standalone novels The Good Daughter, Pretty Girls, and Girl, Forgotten. She is published in 120 countries with more than 40 million copies sold across the globe. Pieces of Her is a #1 Netflix original series starring Toni Collette. The Will Trent Series will air on ABC in 2023, and The Good Daughter and False Witness are in development for film/tv. Slaughter is the founder of the Save the Libraries project—a nonprofit organization established to support libraries and library programming. A native of Georgia, she lives in Atlanta.

“Stunning family.... Certain to be a book of the year.” — Lee Child

“One of the boldest thriller writers working today.” — Tess Gerritsen

“Her characters, plot, and pacing are unrivaled among thriller writers.” — Michael Connelly

“Breathtaking…. Fiction doesn’t get any better than this.” — Jeffery Deaver, New York Times-bestselling author of Solitude Creek and The Skin Collector

“A hell-raising thriller…a genuinely exciting narrative driven by strong-willed female characters who can’t wait around until the boys shake the lead out of their shoes.” — New York Times Book Review