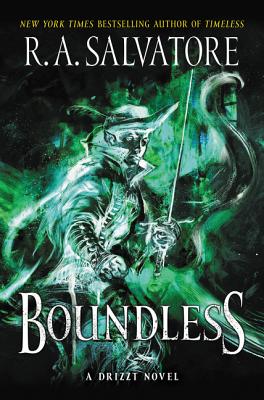 This is book number 2 in the Generations series.

Split between time and two worlds, Zaknafein had always been conflicted. That inner turmoil was magnified by his inferior position as a male dark elf in the matriarchal drow society. Only his status as one of the greatest warriors—as well as his friendship with the mercenary Jarlaxle—kept him sane. When he finally perished, he was content knowing he left behind a legacy as substantial as his son Drizzt.

Except . . . someone isn’t ready for Zaknafein to be dead. And now he’s back, hundreds of years later, in a world he doesn’t recognize. His son’s companions are not the prideful—and bigoted—males the drow warrior was accustomed to in his previous life. Drizzt’s circle includes dwarves, elves, and, perhaps worst of all, a human wife.

Struggling to navigate this transformed new world, Zaknafein realizes that some things have not changed: the threat of demons and the machinations of a drow matron no longer content with her family’s position in the ranks of Houses.

Though he has been displaced in time, Zaknafein is still a warrior. And no matter what prejudices he must overcome, he knows he will do his duty and fight by Drizzt’s side to stem the tide of darkness that threatens the Realms.

Thirty-four years ago, R. A. Salvatore created the character of Drizzt Do’Urden, the dark elf who has withstood the test of time to stand today as an icon in the fantasy genre. With his work in the Forgotten Realms, the Crimson Shadow, the DemonWars Saga, and other series, Salvatore has sold more than thirty million books worldwide and has appeared on the New York Times bestseller list more than two dozen times. He considers writing to be his personal journey, but still, he’s quite pleased that so many are walking the road beside him! R.A. lives in Massachusetts with his wife, Diane, and their two dogs, Dexter and Pikel. He still plays softball for his team, Clan Battlehammer, and enjoys his weekly DemonWars: Reformation RPG and Dungeons & Dragons 5e games. Salvatore can be found at RASalvaStore.com

“Boundless picks up right where Timeless left off and sustains the vibrant heartbeat of the saga.”
— Nerds on Earth

“Boundless′s breakneck pace is why fans … will find themselves jumping in and holding on tight for the entire novel.”