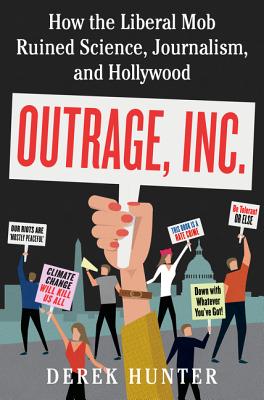 From Derek Hunter—one of the most entertaining political writers today—comes an insightful, alarming look at how progressives have taken over academia, pop culture, and journalism in order to declare everything liberal great, and everything great, liberal.

Progressives love to attack conservatives as anti-science, wallowing in fake news, and culturally backwards. But who are the real denialists here?

There are three institutions in American life run by gatekeepers who have stopped letting in anyone who questions their liberal script: academia, journalism, and pop culture. They use their cult-like groupthink consensus as "proof" that science, reporting, and entertainment will always back up the Democrats. They give their most political members awards, and then say the awards make their liberal beliefs true. Worse, they are using that consensus to pull the country even further to the left, by bullying and silencing dissent from even those they've allowed in.

Just a few years ago, the media pretended they were honest brokers. Now a CNN segment is seven liberals versus a sacrificial lamb. MSNBC ate their sacrificial lamb. Well, Chris Matthews did. Tired of being forced to believe or else, Derek Hunter exposes the manufactured truths and unwritten commandments of the Establishment. With research and a biting, sarcastic wit, he explains:

Derek Hunter is a writer, columnist, and political consultant. He has worked at the Heritage Foundation as a health policy analyst; was federal affairs manager at Americans for Tax Reform, focusing on tech, education, and judicial policy; and was a cofounder of the Daily Caller. He lives with his wife and children just outside Washington, DC, in the People’s Republic of Maryland.

“Derek Hunter takes a scalpel to the liberal outrage culture anddissects it like a fine surgeon . . . then he breaks out the hammer and finishesthe job. Packed with thorough research, keen insight, and biting humor,Outrage, Inc. is an important book documenting the Left’s manipulationof all aspects of our culture to advance its radical agenda.”
— DAVID LIMBAUGH

“Outrage has become the newest weapon in progressivism’s arsenalagainst truth. It accompanies ‘science says.’ Combined, the Left wants to steer conversations in its direction and win arguments by rigging the system. Derek Hunter exposes not only the Left’s war on truth but also howit continually sucks the fun out of everything to promote outrage.”
— ERIC W. ERICKSON

“Suppress facts. Silence dissenters. Manufacture hate. Tolerateintolerance and violence in the name of social justice and peace. Theseare the radical commandments slavishly worshiped by the media, academia, and Hollywood. The result? Fake news, campus chaos, and nonstop propagandizing by celebrity hypocrites. In Outrage, Inc., the irrepressible Derek Hunter defiantly runs toward this out-of-control liberal mob andbeats back the bullies with truth. Not ‘my’ truth or ‘your’ truth,but The Truth. Wanna trigger leftists? Buy this book.”
— MICHELLE MALKIN

“Outrage was a response saved for the most egregiousoffenses by those with a moral compass, but in today’s society,outrage is a vehicle for attention, a substitute for informed debate,a tactic for the ethically rudderless. Derek Hunter walks usthrough how if everything is outrageous, nothing is.”
— DANA LOESCH