A Cruelty Special to Our Species: Poems (Paperback) 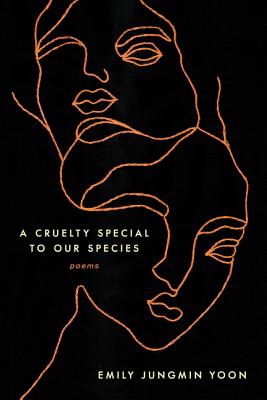 A Cruelty Special to Our Species: Poems (Paperback)

A piercing debut collection of poems exploring gender, race, and violence from a sensational new talent

In her arresting collection, urgently relevant for our times, poet Emily Jungmin Yoon confronts the histories of sexual violence against women, focusing in particular on Korean so-called “comfort women,” women who were forced into sexual labor in Japanese-occupied territories during World War II.

In wrenching language, A Cruelty Special to Our Species unforgettably describes the brutalities of war and the fear and sorrow of those whose lives and bodies were swept up by a colonizing power, bringing powerful voice to an oppressed group of people whose histories have often been erased and overlooked. “What is a body in a stolen country,” Yoon asks. “What is right in war.”

Moving readers through time, space, and different cultures, and bringing vivid life to the testimonies and confessions of the victims,Yoon takes possession of a painful and shameful history even while unearthing moments of rare beauty in acts of resistance and resilience, and in the instinct to survive and bear witness.

Emily Jungmin Yoon is the author of Ordinary Misfortunes, the 2017 winner of the Sunken Garden Chapbook Prize by Tupelo Press. Yoon was born in Busan, Republic of Korea and received her BA at the University of Pennsylvania and MFA in Creative Writing at New York University. She has been the recipient of awards and fellowships from Ploughshares’ Emerging Writer’s Contest, AWP’s WC&C Scholarship Competition, and the Poetry Foundation, among others. Her poems and translations have appeared in publications including The New Yorker, POETRY, The New York Times Magazine, and Korean Literature Now. She currently serves as the Poetry Editor for The Margins, the literary magazine of the Asian American Writers’ Workshop, and is a PhD student studying Korean literature in the Department of East Asian Languages and Civilizations at the University of Chicago.

“With searing witness and quietly prodigious song here is a volume that speaks sharp truths to those who would wish the forgetting of one of the darkest hours of humanity. A lovely, moving, and ultimately devastating book.”
— Chang-rae Lee

“Emily Jungmin Yoon finds language to convey its horror and violence—painfully and unsparingly, but somehow also with a delicacy, precision, and attention that does not impose the true (literal) brutality on the reader, which makes these poems all the more shocking and unforgettable.”
— Amy Tan

“Emily Jungmin Yoon’s...un-erring lyrical sense, evident in all her poems, including these meditations on slavery and rape, allow her to transcend the limits of language itself. From her refusal of dismissive epiphany to the profound linguistic insights that underscore these rare searching poems, beauty occurs.”
— Carol Muske-Dukes

“[A] deeply reverent debut collection. . . [Yoon] writes these poems in her second language, an English in which she takes mindful, absorbing residence while her ‘native tongue is a code’ that orchestrates with brimming precision what can be imagined, mourned, remembered, invented and haunted.”
— Eleanor Chai

“The poems...are miracles of clarity and precision that are all the more miraculous because their strength, piercing lyricism, and transparent humanity never quaver or falter or step back for a second.”
— Vijay Seshadri

“A heart-wrenching debut...Yoon’s work is compelling in part because it shows the importance of understanding history and its enduring impact.”
— Washington Post