The Redemption of Philip Thane: The Penhallow Dynasty (Mass Market) 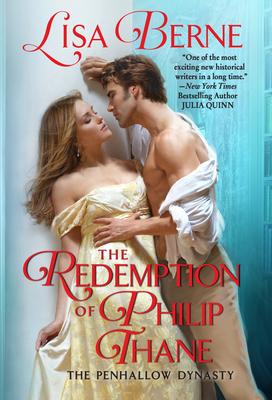 The Redemption of Philip Thane: The Penhallow Dynasty (Mass Market)

This is book number 6 in the Penhallow Dynasty series.

The celebrated Penhallow Dynasty series continues in this deliciously witty and romantic Regency, perfect for the readers of Eloisa James, Lisa Kleypas, and Sarah Maclean.

How many times can a rake get it wrong . . . before he becomes Mr. Right?

Philip Thane—rogue, rake and scoundrel extraordinaire—hadn’t wanted to visit some dumpy provincial town to give a speech, but he’d struck a devil’s bargain with old Henrietta Penhallow, the imperious family matriarch. Nor did he expect that once he got there, he’d somehow be living the same day over and over again. It’s strange! It’s terrible!

On the other hand, it is giving him time to cozy up to the delectable, brainy Margaret Allen, in town to research the book she’s writing. Philip is sure she’ll fall starry-eyed into his arms, just as women always do.

But to his amazement Miss Allen stands firm against his wiles, day after day. How can she resist his seductive charm? Why won’t she change her mind? What must he do to win her heart?

Maybe—just maybe—it isn’t Margaret who needs to change, but rather a certain rogue, in love for the first time in his life, who will . . .

“Enchanting . . . Champagne in book form—bubbly, fun, and intoxicating.” —Entertainment Weekly on Lisa Berne’s The Worst Duke in the World

Lisa Berne read her first Georgette Heyer novel at fourteen — it was the effervescent Lady of Quality — and was instantly captivated. Later, she was a graduate student, a grant writer, and a teacher — and now writes historical romance for Avon Books, with her stories set mostly in Regency-era Britain. She lives with her family in the Pacific Northwest.

Please visit Lisa on the web at www.LisaBerne.com . . .  and say hello on Facebook! LisaBerneAuthor

“One of the most exciting new historical writers in a long time.”
— Julia Quinn

"While offering a Regency riff on the movie Groundhog Day, with a dash of Macbeth and pinch of Greek mythology added for good measure, Berne fashions another sublime addition to her Penhallow series, one that is brilliantly enhanced by a stellar cast of characters (Margaret’s doughty lexicographer aunt is a particular delight) and generous measures of the author’s wry wit and wondrous sense of whimsy."
— Booklist (starred review)

“Attention, Bridgerton fans: if you’re ready to delve deeper into the world of historical romances, The Worst Duke in the World by Lisa Berne is a fun place to start.”
— Pop Sugar

“Enchanting . . . Champagne in book form—bubbly, fun, and intoxicating.”
— Entertainment Weekly on The Worst Duke in the World

“A charming, fairy tale–like sensibility powering the latest blissfully romantic addition to Berne’s Penhallow series, following Engaged to the Earl (2020)... This is a transporting, transcendent triumph.”
— Booklist (starred review) on The Worst Duke in the World

“Berne’s sparkling fifth Penhallow Dynasty Regency romance...pairs an unconventional duke with the newest member of the wealthy Penhallow family. [The heroine’s] curious combination of naivete and street smarts makes her an endearing heroine, and the romance...is enhanced by witty banter. Series fans will be thrilled.”
— Publishers Weekly on The Worst Duke in the World

“Deftly funny . . . [with] strengths that set it apart from typical Regency romances. A nice portrait of what courtship is like for a dedicated single parent.”
— Kirkus Reviews on The Worst Duke in the World