Angel in a Devil's Arms: The Palace of Rogues (Mass Market) 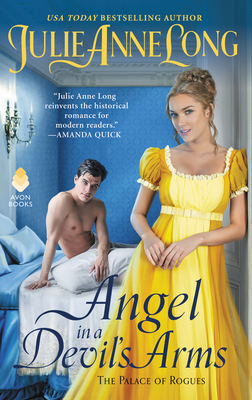 Angel in a Devil's Arms: The Palace of Rogues (Mass Market)

This is book number 2 in the The Palace of Rogues series.

He has devil’s blood in his veins. At least, that’s always been the legend. How else could the Duke of Brexford’s notorious bastard son return from the dead? The brutal decade since Lucien Durand, Lord Bolt, allegedly drowned in the Thames forged him into a man who always gets what—and who—he wants. And what he wants is vengeance for his stolen birthright . . . and one wild night in Angelique Breedlove’s bed.

Angelique recognizes heartbreak when the enigmatic Lord Bolt walks into The Grand Palace on the Thames, and not even his devastating charm can tempt her to risk her own ever again. One scorching kiss drives home the danger.

But in the space between them springs a trust that feels anything but safe. And the passion—explosive, consuming—drives Lucien to his knees. Now his whole life depends on proving his love to a woman who doesn’t believe in it . . . because his true birthright, he now knows, is guardian of Angelique Breedlove’s heart.

"Long finds that delectable sweet spot with Angel in a Devil’s Arms, welcoming us all to the cozy warmth of the Grand Palace on the Thames with the peculiar blend of humor and pathos she writes with such aplomb."

"Deploying her usual perfectly calibrated mix of irresistibly dry wit and superbly nuanced characterization, RITA Award-winning Long adds another winner to her Palace of Rogues series with this lushly sensual, exquisitely emotional, and gracefully written tale about two people desperately trying not to fall in love with each other."
— Booklist (starred review)