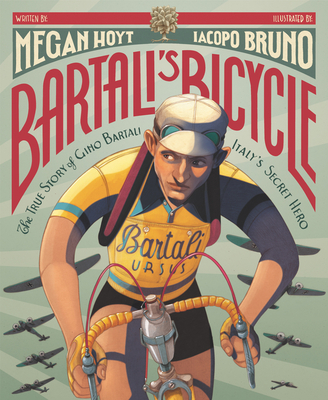 “Elbows in. Head down. Hoyt’s writing puts us right in the saddle of this amazing true story. Striking compositions and sumptuous renderings illuminate the courageous experiences of a dedicated athlete and quiet hero who saved hundreds of lives in WWII but kept it a secret all his life. Sure to inspire another generation to keep their faces to the wind.”
— Julie Rowan-Zoch, Old Firehouse Books, Fort Collins, CO

Gino Bartali pedaled across Italy for years, winning one cycling race after another, including the 1938 Tour de France. Gino became an international sports hero! But the next year, World War II began, and it changed everything. Soldiers marched into Italy. Tanks rolled down the cobbled streets of Florence. And powerful leaders declared that Jewish people should be arrested.

To the entire world, Gino Bartali was merely a champion cyclist. But Gino’s greatest achievement was something he never told a soul—that he secretly worked with the Italian resistance to save hundreds of Jewish men, women, and children, and others, from certain death, using the one thing no authority would question: his bicycle.

This compelling nonfiction picture book for elementary-age readers offers a unique perspective on World War II history. It's a strong choice for units on the war and for biographies of lesser-known heroes in history and in sports.

Megan Hoyt first fell in love with reading on a cozy branch of the crab apple tree outside her Texas home. She devoured Beverly Cleary’s books there, and Marguerite Henry’s “horsey books” still remind her of the loud Texas cicadas at dusk. Bartali’s Bicycle is Megan’s debut picture book biography. Her first picture book was Hildegard’s Gift, and her poem, “Thanksgiving by the Lake,” appears in the anthology Thanku: Poems of Gratitude. When she is not writing, Megan tutors child actors on set for Disney, Warner Bros., Showtime, and Cinemax, among others. She lives in Charlotte, North Carolina, where most days she is surrounded by three fluffy pups and piles upon piles of picture books. Visit Megan online at www.meganhoyt.net.

Iacopo Bruno is a graphic designer and illustrator. He is also the illustrator of the acclaimed books Mesmerized: How Ben Franklin Solved a Mystery that Baffled All of France and Anything But Ordinary Addie, both by Mara Rockliff. He lives and works in Milan, Italy, with his wife, Francesca. Learn more about Iacopo at www.theworldofdot.com and www.iacopobruno.blogspot.it.

“The author uses clear, descriptive sentences that flow and paint a vivid picture. The art is striking and has an art-deco feel to it, which lends itself to the era…A great start for any student wanting to know more about how different people helped resist the efforts of the Nazis during World War II.”  — School Library Journal (starred review)

“A well-made story and a welcome, timely reminder of what true courage is.” — Kirkus Reviews

"This attractive and engaging account of a famous athlete, recognized as Righteous Among the Nations in 2013, and his quiet heroism is inspirational and adds a unique perspective to Holocaust literature." — Booklist

"This beau­ti­ful and infor­ma­tive new pic­ture book biog­ra­phy of Bar­tali encour­ages young read­ers to empathize with his dilem­ma and to under­stand the incred­i­ble brav­ery of this qui­et and mod­est man. High­ly rec­om­mend­ed." — Jewish Book Council