The Spymaster of Baghdad: A True Story of Bravery, Family, and Patriotism in the Battle against ISIS (Hardcover) 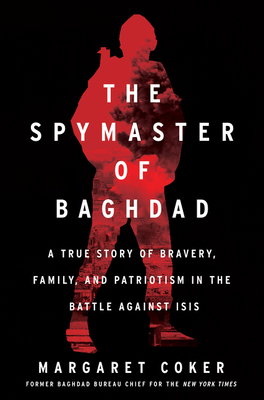 The Spymaster of Baghdad: A True Story of Bravery, Family, and Patriotism in the Battle against ISIS (Hardcover)

From the former New York Times bureau chief in Baghdad comes the gripping and heroic story of an elite, top-secret team of unlikely spies who triumphed over ISIS.

The Spymaster of Baghdad tells the dramatic yet intimate account of how a covert Iraqi intelligence unit called “the Falcons” came together against all odds to defeat ISIS. The Falcons, comprising ordinary men with little conventional espionage background, infiltrated the world’s most powerful terrorist organization, ultimately turning the tide of war against the terrorist group and bringing safety to millions of Iraqis and the broader world. Centered around the relationship between two brothers, Harith al-Sudani, a rudderless college dropout who was recruited to the Falcons by his all-star younger brother Munaf, and their eponymous unit commander Abu Ali, The Spymaster of Baghdad follows their emotional journey as Harith volunteers for the most dangerous mission imaginable. With piercing lyricism and thrilling prose, Coker’s deeply-reported account interweaves heartfelt portraits of these and other unforgettable characters as they navigate the streets of war-torn Baghdad and perform heroic feats of cunning and courage.

The Falcons’ path crosses with that of Abrar, a young, radicalized university student who, after being snubbed by the head of the Islamic State’s chemical weapons program, plots her own attack. At the near-final moment, the Falcons intercept Abrar’s deadly plan to poison Baghdad’s drinking water and arrest her in the middle of the night—just one of many covert counterterrorism operations revealed for the first time in the book.

Ultimately, The Spymaster of Baghdad is a page-turning account of wartime espionage in which ordinary people make extraordinary sacrifices for the greater good. Challenging our perceptions of terrorism and counterterrorism, war and peace, Iraq and the wider Middle East, American occupation and foreign intervention, The Spymaster of Baghdad is a testament to the power of personal choice and individual action to change the course of history—in a time when we need such stories more than ever.

Margaret Coker is a prize-winning investigative journalist who, for the last nineteen years, has covered stories from thirty-two countries on four continents. Since the U.S. invasion of Iraq in 2003, Coker has largely focused on the Middle East, writing about corruption, counterterrorism, and cyber warfare. Her stories written during the 2011 Libyan uprising over Muammar Gaddafi for the Wall Street Journal won prizes for investigative journalism and diplomatic reporting. As Turkey bureau chief for the Wall Street Journal, Coker contributed to a 2016 series that was a finalist for the Pulitzer Prize in international reporting. As the New York Times bureau chief in Baghdad in 2018, Coker won prizes for feature writing for her front-page stories about Iraq. Margaret and her husband live in Savannah, Georgia, with their two dogs and cat.

"Margaret Coker, formerly of The Wall Street Journal and The New York Times, continued to cover Iraq after most of the American press corps had moved on; she has produced a gripping new book about the shadow war between Iraqi intelligence officers and the Islamic State...Coker’s reporting on these men, their families, and the family of a young woman recruited by terrorists is so meticulous that it lets her enter invisibly a closed, sometimes frightening world and portray it with cinematic detail...Coker’s Iraq emerges as its own country, more impressive than the stage of an American drama that absorbed us for a few years, more real than the projection of American fantasies and traumas, returning to its own people, finding its own destiny."
— George Packer, The Atlantic

"An eye-opening account revealing that Iraqi competence and heroism were essential to its victory over terrorism."
— Kirkus Reviews

"The Spymaster of Baghdad is the amazing true story of the secret war against ISIS in Iraq, which Margaret Coker tells with great verve and authority."
— Peter Bergen, New York Times bestselling author of Manhunt

“Margaret Coker has brought to readers a gripping spy drama that doubles as a page-turning story of family and survival. A moving window into patriots who faced down terror and fought for their country.”
— Gayle Tzemach Lemmon, New York Times bestselling author of Ashley’s War and The Daughters of Kobani

“Margaret Coker’s The Spymaster of Baghdad is a stunning and meticulous account of exceptional bravery and espionage carried out by Iraqis in the most dangerous stages of the war against ISIS. These are the type of stories we so rarely get to hear, and we are lucky to have journalists like Coker to tell them.”
— Phil Klay,  award-winning author of Redeployment and Missionaries

“A thrilling and skillfully reported tale of the invisible heroes of the Iraqi fight against terrorism, that, at its heart, is a poignant story of family and sacrifice.”
— Tamer Elnoury, covert operative and New York Times bestselling author of American Radical.

“Oftentimes, real life narrated by a master story teller reads better than any spy novel one could come across. The Spymaster of Baghdad, written by the intrepid Margaret Coker, is a heartbreaking and courageous story well worth reading and sharing with the entire world. We all owe a debt of gratitude to Abu Ali Al-Basri and the Iraqi Falcons Unit for their important role in the fight against the most lethal terrorist group of our time.”
— Anne Speckhard, Director of the International Center for the Study of Violent Extremism (ICSVE).

"A unique masterpiece in the genres of espionage writing and spy biography."
— Vin Arthey, The Scotsman

"Ms. Coker weaves together a spy story worthy of John le Carré...its constituent parts are riveting in and of themselves, but Ms. Coker brings them together in such a powerful way that it goes well beyond its “spy genre” label."
— Joshua C. Huminski, The Diplomatic Courier