Mariana and Her Familia (Hardcover) 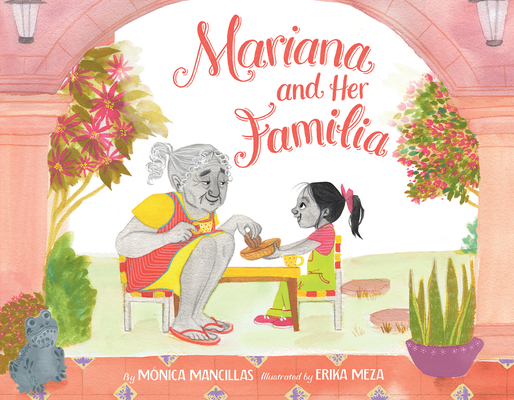 Mariana and Her Familia (Hardcover)

A heartwarming picture book about a young girl on her first trip to visit family in Mexico, who learns there is no language barrier when it comes to love—from debut author Mónica Mancillas and rising star illustrator Erika Meza. Perfect for fans of Where Are You From? and Mango, Abuela, and Me.

Mariana is visiting her abuelita and extended family in Mexico for the first time. Her tummy does a flip as she and Mami cross the frontera.

There are all new sights, smells, and sounds. And at Abuelita’s house, Mariana is overwhelmed by new faces and Spanish phrases she doesn’t understand.

But with a story, some kindness, and a few new words from Abuelita, Mariana discovers that the love of family knows no cultural divide.

Mónica Mancillas is an author, musician, and unapologetic dreamer. She is passionate about writing books in which children of all backgrounds can see themselves on the pages. A first-generation immigrant, her own story closely mirrors that of Mariana and Her Familia. She lives in California with her familia and their dog, Annie, a beta fish, and a lizard. Learn more about her books at www.monicamancillas.com.

Erika Meza migrated from Mexico in 2013, leaving behind her family, friends and her favorite food. She lived in a dungeon with a ghosts-and-ghouls-painting princess, learned how to tell stories, then found and lost a spotted dog in Paris, where she attended school. She finally crossed the France-UK border and settled down in London, where she lives in a small flat and works as an author and illustrator, aided by her cat who tries to leave inky paw prints on her work. She tries to go back home often, at the border of Tijuana and San Diego, where her book was born.

"Mancillas and Meza’s picture book is a poignant reminder that, while loved ones may not speak the same languages, their affection and care for one another transcends any human language and is a language in and of itself. Mancillas’ touching story will be relatable to many first-, second-, and third-generation children and grandchildren of immigrants, who may be reconnecting with their own familias after time and distance apart." — Booklist (starred review)

"A child’s uncertainty in navigating the dual identities of a bicultural upbringing is affirmingly depicted in Mancillas’s insightful debut. Mancillas’s assured narrative, which rings with compassion, smatters Spanish words throughout English lines; in Meza’s watercolor pencil and gouache illustrations, Mariana swells with love that gives way to bright-eyed affection for a new place and new people." — Publishers Weekly

“Measured in its empathy, this tale admirably explores a familial scenario that many readers will understand all too well…. A sweet look at what familia can mean.” — Kirkus Reviews