How to Think Like a Lawyer--and Why: A Common-Sense Guide to Everyday Dilemmas (Legal Expert Series) (Paperback) 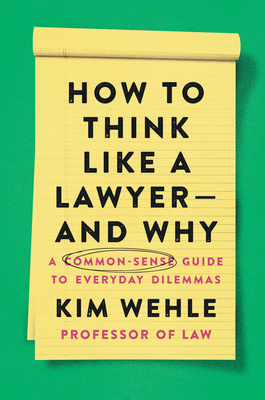 How to Think Like a Lawyer--and Why: A Common-Sense Guide to Everyday Dilemmas (Legal Expert Series) (Paperback)

A law professor and author teaches non-attorneys how to think like a lawyer to gain advantage in their lives—whether buying a house, negotiating a salary, or choosing the right healthcare.

Lawyers aren’t like other people. They often argue points that are best left alone or look for mistakes in menus “just because.” While their scrupulous attention to detail may be annoying, it can also be a valuable skill.

Do you need to make health care decisions for an aging parent but are unsure where to start? Are you at crossroads in your career and don’t know how to move forward? Have you ever been on a jury trying to understand confusing legal instructions? How to Think Like a Lawyer has the answers to help you cut through the confusion and gain an advantage in your everyday life. Kim Wehle identifies the details you need to pay attention to, the questions you should ask, the responses you should anticipate, and the pitfalls you can avoid. Topics include:

Wehle shows you how to break complex issues down into digestible, easier-to-understand pieces that will enable you to make better decisions in all areas of your life.

Kim Wehle is a tenured Professor of Law at the University of Baltimore School of Law, where she teaches and writes on the constitutional separation of powers, administrative law, and civil procedure. She was formerly an Assistant United States Attorney and an Associate Counsel in the Whitewater Investigation. Professor Wehle has been a commentator for CBS News, as well as a Contributor for BBC World News and BBC World News America on PBS, an Op-Ed Contributor for The Bulwark, and an Opinion Contributor for The Hill. She has been a regular guest legal analyst on various media outlets regarding Special Counsel Robert Mueller's probe into Russian influence in the 2016 presidential election and other issues regarding the structural Constitution and the Trump Administration, including on CNN, MSNBC, NPR’s Morning Edition, PBS NewsHour, and Fox News. Her articles have also appeared in the Baltimore Sun, the L.A. Times, and NBC News Think. She is regularly interviewed and cited by prominent print journalists on a range of legal issues. She lives in Chevy Chase, Maryland, with her children.