How to Survive America (Paperback) 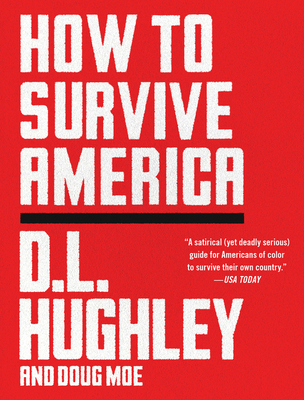 How to Survive America (Paperback)

Legendary comedian D.L. Hughley uses his "hilarious yet soul-shaking" (Black Enterprise) humor to confront racism's unjust impact on the health and wellbeing of Blacks and minorities

White people love survival guides. But have you noticed they’re always about ridiculous activities in locations far from home, with chapters like “How to Survive an Avalanche" or "How to Live on Bugs in the Jungle.” Huh?!

You know who really needs a survival guide? Black and brown Americans. For surviving their own damn country! Minority populations wake up every day in a battle for their health and safety. Thankfully, legendary activist-comedian D.L. Hughley offers How to Survive America, a fearless satire that exposes racism’s unjust toll on our bodies and minds.

Even before COVID-19 disproportionately impacted minority communities, life expectancy for Blacks was a full three years less than for white Americans. The very air we breathe is more polluted, our water is more contaminated, our local food options are toxic, and our jobs are underpaid. Despite the obvious need, the quality of our health care is tragically inadequate. Our communities are statistically less safe than the average, and yet we’re terrorized by the law-enforcement and criminal-justice systems that are supposed to protect us, sending Blacks to prison at five times the rate of whites. Not least, our means of addressing these injustices—voting—is perennially under assault.

It’s enough to drive you crazy. Well, guess what? According to Cigna, Blacks are 20 percent more likely to report “psychological distress” yet “50 percent less likely to receive counseling or mental health treatment.” It’s almost like the entire country has been structured with no regard for our welfare. Hmmm.

Whether you’re Black, white, brown, or Asian, don’t leave home without arming yourself with How to Survive America!

D.L. Hughley is one of “The Original Kings of Comedy.” He hosts the national radio program The D.L. Hughley Show, which is syndicated in more than sixty markets. His comedy specials have appeared on HBO, Netflix, Comedy Central, and Showtime. His satirical documentary special, DL Hughley: The Endangered List, received the prestigious George Foster Peabody Award. He created and starred in the ABC sitcom The Hughleys. He is the author of the New York Times bestsellers How Not to Get Shot and Black Man, White House. How Not to Get Shot was selected as a finalist for the Goodreads Choice Awards and the Audie Awards. D.L. lives with his family in Los Angeles, California.

Doug Moe is the co-author of two books for D.L. Hughley: “Surrender, White People!: Our Unconditional Terms for Peace” and the New York Times Bestseller “How Not to Get Shot: And Other Advice From White People” (“A satirical but apt addition to the culture’s fraught conversation about race.” - New York Times Book Review).  His book “Man Vs Child: One Dad’s Guide to the Weirdness of Parenting” was named one of Amazon’s Best Humor Books of 2017.  He’s a longtime performer and instructor at the Upright Citizens Brigade Theatre. On TV, you've maybe seen me in "Inside Amy Schumer," "30 Rock" or "Difficult People," among other places.

“Hughley combines his comedic talents with personal history and experience as a political commentator to address glaring discrepancies between White and Black populations regarding overall health, access to health care, toxic environments, educational bias, and violence. … Darkly humorous. ... An acerbic and laser-focused demand for restorative racial justice from an ardent advocate.” — Kirkus Reviews

“Hughley uses his trademark humor to address the stark divisions in society that stem from centuries of white supremacy. His solution involves a reckoning with America's history, reparations, and a hard look at oneself.” — People on Surrender, White People!

“A satirical look at white supremacy, which examines racial inequality in the United States across education, health care and the housing market.” — New York Times on Surrender, White People!

“A simultaneously humorous and serious take on race relations in the wake of a near unprecedented resistance effort to stem fatal police violence. ... The author effectively combines his outspoken comedic sensibilities with his longtime experience with political commentary. ... Mixes important statistics and earnest policy reforms with his witty perspective gained from his upbringing in South Central LA and decades of successful comedy tours in front of black and white audiences. Readers will frequently laugh out loud, but there’s far more to this couldn’t-be-timelier book than just jokes. ... Bitingly comedic.” — Kirkus Reviews on Surrender, White People!