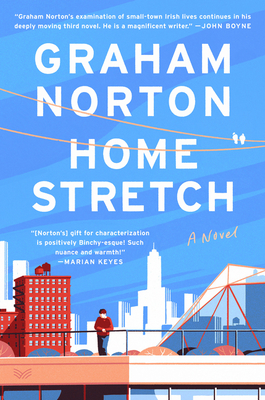 In this “compelling, bighearted, emotionally precise page-turner” (Sunday Times), the New York Times bestselling writer and acclaimed television host explores the aftermath of a tragedy on a small-town to illuminate the shame and longing that can flow through generations—and how the secrets of the heart cannot stay be buried forever.

It is 1987 and a small Irish community is preparing for a wedding. The day before the ceremony, a group of young friends, including the bride and groom, are involved in an accident. Three survive. Three are killed.

The lives of the families are shattered and the rifts between them ripple throughout the small town. Connor survived, but living among the angry and the mourning is almost as hard as carrying the shame of having been the driver. He leaves the only place he knows for another life, taking his secrets with him. Travelling first to Liverpool, then London, he eventually makes a home—of sorts—for himself in New York, where he finds shelter and the possibility of forging a new life.

But the secrets—the unspoken longings and regrets that have come to haunt those left behind—will not be silenced. Before long, Connor will have to confront his past.

A powerful and timely novel of emigration and return, Home Stretch demonstrates Norton’s keen understanding of the power of stigma and secrecy—and their devastating effect on ordinary lives.

Graham Norton is the author of the novels Holding, which was a New York Times bestseller and won the 2016 Irish Independent Popular Fiction Award, and A Keeper. One of the UK's best loved broadcasters, Graham has won eight BAFTAs and is the host of The Graham Norton Show on BBC1 and BBC America, has a weekly show on BBC Radio 2, and writes a column for the Telegraph. Born in Dublin and raised in West Cork, he now lives in London.

"Excellent. . . . With surprising twists and touching moments, Norton explores the immense sense of loss that comes with being a survivor, and how nothing is ever truly forgotten for the families of those who died. . . . Norton delicately covers themes of abandonment, death, and loss with sophistication and thoughtful empathy. . . . This gripping and compassionate outing is Norton’s best yet."
— Publishers Weekly

"A subtle portrait of small-town Ireland; an unblinking study of shame & homophobia; a map of cultural shifts between 1980s & now; a kind, wise, perceptive novel by an author rich in these qualities."
— David Mitchell

"He is a deftly skilled writer who has honed a prose style that suits his stories perfectly . . . traversing tragedy and humour with equal aplomb. . . . Home Stretch is a wonderful display."
— Irish Times

"Norton’s third novel is a thoughtful examination of sexual identity, shame, and the impact of collective grief."
— Observer

"Norton has all of her [Maeve Binchy’s] ability to write about sadness and cruelty, while investing his story with immense warmth. What right has such a successful entertainer to pen a novel as good as this?"
— Mirror

"Norton has a knack for capturing the sturdy, melancholic small-town Irish life where secrets are only revealed when they have to be, and even then in a controlled fashion. His characters come to vivid life, sweeping readers up in this quiet, affecting novel."
— Booklist

"Graham Norton's new novel has me in floods... His gift for characterisation is positively Binchy-esque! Such nuance and warmth! It's GORGEOUS"
— Marian Keyes

"I loved HOME STRETCH ... one of those books that stays with you so long after you've finished it"
— Nigella Lawson