The Patient: A Novel (Paperback) 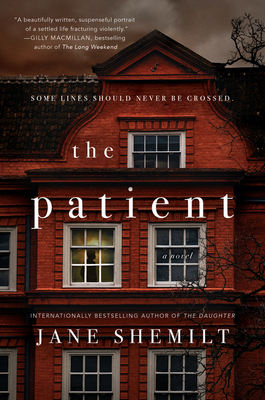 The Patient: A Novel (Paperback)

A shocking and twisty novel of psychological suspense about a boundary-breaking love affair between a doctor and her patient, by Jane Shemilt, Edgar-nominated, #1 international bestselling author of The Daughter.

What price would you pay for falling in love?

Rachel is a respected doctor who lives in a picturesque and affluent English village where her husband Nathan teaches at an elite private school. Competent, unflappable, and nearing 50, Rachel has everything in her life firmly in her control, even if some of its early luster has worn off. But one day a new patient arrives at her practice for emergency treatment. Luc is a French painter married to a wealthy American woman who’s just bought and restored a historic home on the edge of Rachel’s posh neighborhood. The couple has only recently arrived, but Luc is struggling with a mental disorder, and so he goes to the nearest clinic…to Rachel.

Their attraction is instant, and as Rachel’s sense of ethics wars with newly awakened passion, the affair blinds her to everything else happening around her. A longtime patient appears to be following her every movement, turning up unexpectedly wherever she goes. Her somewhat estranged adult daughter Lizzie is hiding a secret—or at least, hiding it from Rachel. Nathan has grown sour and cold as well—or is that merely Rachel’s guilty conscience weighing on her? But when one of her colleagues winds up murdered and Luc is arrested for the crime, everything Rachel didn’t know about her life explodes into the open—along with her affair with her patient—a disgrace and scandal that will have consequences no one could have predicted.

While working full time as a physician, Jane Shemilt received an M.A. in creative writing. She was shortlisted for the Janklow and Nesbit award and the Lucy Cavendish Fiction Prize for The Daughter, her first novel. She and her husband, a professor of neurosurgery, have five children and live in Bristol, England.

“Shemilt injects a great deal of suspense into her narrative in both time frames, even as her fluid prose eloquently captures a mother’s grief and painful journey to self-awareness.” — Booklist on The Daughter

“Jenny is a strong believable character…[her] journey is a memorable one.” — Publishers Weekly on The Daughter

“BRILLIANT, and frighteningly credible, partly because the characters are so beautifully realized. Exquisitely written, utterly gripping and almost unbearably tense—you'll be thinking about it long after you read the final page.” — Lucy Foley, bestselling author of The Hunting Party, on The Playground

"Countless psychological thrillers get compared to Big Little Lies; Shemilt is the real deal." — People on The Playground

"Beautifully written and suffused with dread. Jane Shemilt's domestic settings are seductively vivid, and the final outcome is profoundly shocking and terrifying."  — Gilly Macmillan, New York Times bestselling author of To Tell You the Truth, on The Playground

“Beautifully crafted… a tautly coiled spring of suspicion and suspense which builds to a devastating ending.” — Daily Mail (London)