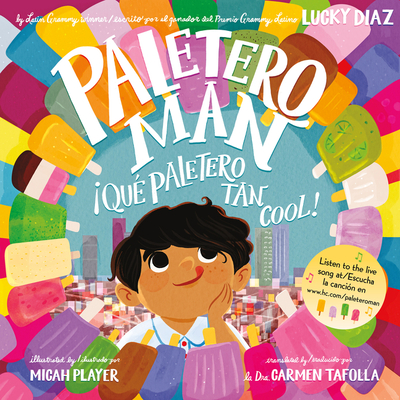 With the English and Spanish text side by side on the page, this bilingual edition of the vibrant picture book celebrating the strength of community and the tastes of summer is ideal for bilingual readers as well as Spanish speakers learning English and vice versa. By Latin Grammy-winning musician Lucky Diaz and celebrated artist Micah Player!

Can you hear his call? Paletas for one! Paletas for all! / ¡Vengan a comprar! Paleta para uno ¡o pa’ to’a la vecindad!

Follow along with our narrator as he passes through his busy neighborhood in search of the Paletero Man. But when he finally catches up with him, our narrator’s pockets are empty. Oh no! What happened to his dinero? It will take the help of the entire community to get the tasty treat now.

Full of musicality, generosity, kindness, and ice pops, this book is sure to satisfy fans of Thank You, Omu! and Carmela Full of Wishes.

Includes an author’s note from Lucky Diaz and a link to a live version of the Lucky Band’s popular song that inspired the book.

“A wonderfully executed treat of a book with a sweet community focus.”—Publishers Weekly (starred review)

Lucky Diaz is a bilingual, songwriting, taco-eating, multi–Latin Grammy Award–winning, GRAMMY nominated and six-time Emmy–nominated musician, children’s television personality and author. His work has been praised by NPR, Billboard magazine, People magazine and the New York Times. He is a Parent’s Choice Gold Award and NAPPA Award winner. In 2020, his album Buenos Diaz was named an official selection of notable works for children by the American Library Association. Lucky’s debut picture book, Paletero Man, has been celebrated with a Kirkus Star, SLJ Star, Publisher’s Weekly Star and Book List Star. He currently lives in a house on a hill in Los Angeles with his wife Alisha, daughter Indiana, and their dog Django. luckydiazmusic.comwww.luckydiazmusic.com

Micah Player began his career designing and illustrating for Paul Frank Industries in Southern California. He is the author of Chloe, Instead and the illustrator of several books and games for children, including Vote for Our Future! and Friday Night Wrestlefest. He lives in a little house beneath a giant tree in the Utah mountains, with a lovely schoolteacher named Stephanie. They are the parents of two rad kids, one Yorkshire terrier, and several Casio keyboards. His favorite paleta is fresas con crema. www.micahplayer.com