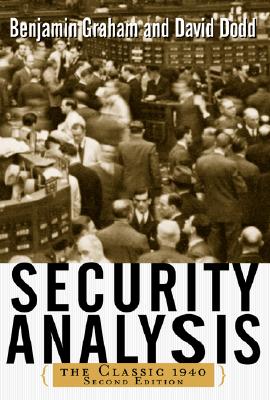 Graham's method of investing is as relevant today as it was when he first espoused it during the Roaring Twenties.--Investor's Business Daily

Benjamin Graham's revolutionary theories have influenced and inspired investors for nearly 70 years. First published in 1934, his Security Analysis is still considered to be the value investing bible for investors of every ilk. Yet, it is the second edition of that book, published in 1940 and long since out of print, that many experts--including Graham prot g Warren Buffet--consider to be the definitive edition. This facsimile reproduction of that seminal work makes available to investors, once again, the original thinking of this century's (and perhaps history's) most important thinker on applied portfolio investment.

Benjamin Graham was a seminal figure on Wall Street and is widely acknowledged to be the father of modern security analysis. The founder of the value school of investing and founder and former president of the Graham-Newman corporation investment fund, Graham taught at Columbia University's Graduate School of Business from 1928 through 1957. He popularized the examination of price-to-earnings (P/E) ratios, debt-to-equity ratios, dividend records, book values, and earnings growth, and also wrote the popular investors' guide The Intelligent Investor. David Dodd was a colleague of Benjamin Graham's at Columbia University, where he was an assistant professor of finance.