The Best Interface Is No Interface: The simple path to brilliant technology (Voices That Matter) (Paperback) 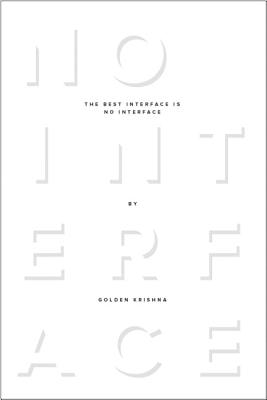 The Best Interface Is No Interface: The simple path to brilliant technology (Voices That Matter) (Paperback)

Our love affair with the digital interface is out of control. We've embraced it in the boardroom, the bedroom, and the bathroom. Screens have taken over our lives. Most people spend over eight hours a day staring at a screen, and some "technological innovators" are hoping to grab even more of your eyeball time. You have screens in your pocket, in your car, on your appliances, and maybe even on your face. Average smartphone users check their phones 150 times a day, responding to the addictive buzz of Facebook or emails or Twitter. Are you sick? There's an app for that Need to pray? There's an app for that Dead? Well, there's an app for that, too And most apps are intentionally addictive distractions that end up taking our attention away from things like family, friends, sleep, and oncoming traffic. There's a better way. In this book, innovator Golden Krishna challenges our world of nagging, screen-based bondage, and shows how we can build a technologically advanced world without digital interfaces. In his insightful, raw, and often hilarious criticism, Golden reveals fascinating ways to think beyond screens using three principles that lead to more meaningful innovation. Whether you're working in technology, or just wary of a gadget-filled future, you'll be enlighted and entertained while discovering that the best interface is no interface.
For years, designer Golden Krishna has been behind the scenes, solving technology problems for companies from startups to Fortune 50. He's currently a Senior UX Designer at Zappos Labs, where he works in a small group dedicated to creating new, delightful experiences for Zappos. Previously, he worked at a Samsung innovation lab, designing and building the near future of consumer electronics. He began his career working at the world-renowned design consultancy Cooper in San Francisco.