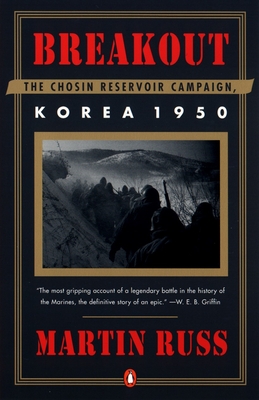 
Available in Warehouse. Wait for Email Confirmation for ETA
On General Douglas MacArthur's orders, a force of 12,000 U.S. Marines were marching north to the Yalu river in late November 1950. These three regiments of the 1st Marine Division--strung out along eighty miles of a narrow mountain road--soon found themselves completely surrounded by 60,000 Chinese soldiers. Despite being given up for lost by the military brass, the 1st Marine Division fought its way out of the frozen mountains, miraculously taking thier dead and wounded with them as they ran the gauntlet of unceasing Chinese attacks.This is the gripping story that Martin Russ tells in his extraordinary book. Breakout is an unforgettable portrayal of the terror and courage of men as they face sudden death, making the bloody battles of the Korean hills and valleys come alive as they never have before.

Of interest will be the new PBS American Experience Documentary "The Battle of Chosin", which premiered on November 1, 2016.
Martin Russ, the recipient of a Purple Heart for his service as a Marine during the Korean War, is the author of The Last Parallel and Line of Departure. He lives in California's Napa Valley.