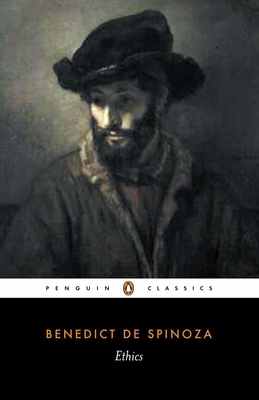 
Available in Warehouse. Wait for Email Confirmation for ETA
A profoundly beautiful and uniquely insightful description of the universe, Benedict de Spinoza's Ethics is one of the masterpieces of Enlightenment-era philosophy.

Published shortly after his death, the Ethics is undoubtedly Spinoza's greatest work - an elegant, fully cohesive cosmology derived from first principles, providing a coherent picture of reality, and a guide to the meaning of an ethical life. Following a logical step-by-step format, it defines in turn the nature of God, the mind, the emotions, human bondage to the emotions, and the power of understanding - moving from a consideration of the eternal, to speculate upon humanity's place in the natural order, the nature of freedom and the path to attainable happiness. A powerful work of elegant simplicity, the Ethics is a brilliantly insightful consideration of the possibility of redemption through intense thought and philosophical reflection. The Ethics is presented in the standard translation of the work by Edwin Curley. This edition also includes an introduction by Stuart Hampshire, outlining Spinoza's philosophy and placing it in context.

For more than seventy years, Penguin has been the leading publisher of classic literature in the English-speaking world. With more than 1,700 titles, Penguin Classics represents a global bookshelf of the best works throughout history and across genres and disciplines. Readers trust the series to provide authoritative texts enhanced by introductions and notes by distinguished scholars and contemporary authors, as well as up-to-date translations by award-winning translators.
Benedict de Spinoza was born in Amsterdam in 1632, where his orthodox Jewish family had fled from persecution in Portugal. Spinoza was expelled from the synagogue for his heterodox philosophy, and earned his living as an optical-lens grinder. He identified God with nature and denied the possibility of an act of creation. Ethics was published in 1677 after his death and explored a doctrine which inspired the Romantic poets.

Edwin Curley is Professor of Philosophy at the University of Michigan and editor and translator of Spinoza's Collected Works.

Stuart Hampshire was elected a Fellow of All Souls in 1936 and was a tutor in philosophy. He has held numerous presitigious academic posts.
The noblest and most lovable of the great philosophers ... ethically he is supreme. (Bertrand Russell)"