The Elder Edda: A Book of Viking Lore (Paperback) 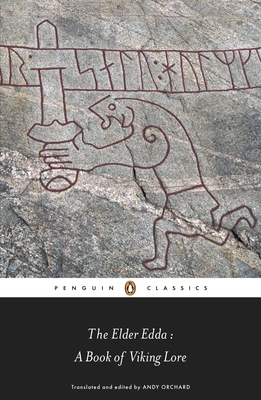 The Elder Edda: A Book of Viking Lore (Paperback)


This title is likely unavailable. Email or call for price and availability.
Compiled by an unknown scribe in Iceland around 1270, and based on sources dating back centuries earlier, these mythological and heroic poems tell of gods and mortals from an ancient era: the giant-slaying Thor, the doomed Völsung family, the Hel-ride of Brynhild and the cruelty of Atli the Hun. Eclectic, incomplete and fragmented, these verses nevertheless retain their stark beauty and their power to enthrall, opening a window on to the thoughts, beliefs and hopes of the Vikings and their world.

For more than seventy years, Penguin has been the leading publisher of classic literature in the English-speaking world. With more than 1,700 titles, Penguin Classics represents a global bookshelf of the best works throughout history and across genres and disciplines. Readers trust the series to provide authoritative texts enhanced by introductions and notes by distinguished scholars and contemporary authors, as well as up-to-date translations by award-winning translators.
Andy Orchard is Professor of English and Medieval Studies in the University of Toronto, and since 2007 Provost and Vice-Chancellor of Trinity College. He is the author of The Poetic Art of Aldhelm (1994), Pride and Prodigies: Studies in the Monsters of the 'Beowulf'-Manuscript (2nd edition 2003), The Cassell Dictionary of Norse Myth and Legend (3rd edition 2002), and A Critical Companion to 'Beowulf' (2nd edition 2005), as well as editor and co-editor of several collections, scholarly journals and academic series.