The Art of Rhetoric (Paperback) 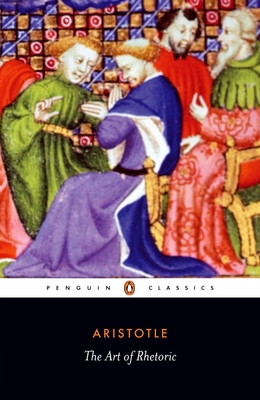 The Art of Rhetoric (Paperback)


Available in Warehouse. Wait for Email Confirmation for ETA
With the emergence of democracy in the city-state of Athens in the years around 460 BC, public speaking became an essential skill for politicians in the Assemblies and Councils - and even for ordinary citizens in the courts of law. In response, the technique of rhetoric rapidly developed, bringing virtuoso performances and a host of practical manuals for the layman. While many of these were little more than collections of debaters' tricks, the Art of Rhetoric held a far deeper purpose. Here Aristotle establishes the methods of informal reasoning, provides the first aesthetic evaluation of prose style and offers detailed observations on character and the emotions. Hugely influential upon later Western culture, the Art of Rhetoric is a fascinating consideration of the force of persuasion and sophistry, and a compelling guide to the principles behind oratorical skill.

For more than seventy years, Penguin has been the leading publisher of classic literature in the English-speaking world. With more than 1,700 titles, Penguin Classics represents a global bookshelf of the best works throughout history and across genres and disciplines. Readers trust the series to provide authoritative texts enhanced by introductions and notes by distinguished scholars and contemporary authors, as well as up-to-date translations by award-winning translators.
Aristotle was born in 384BC. For twenty years he studied at Athens at the Academy of Plato, on whose death in 347 he left, and some time later became tutor to Alexander the Great. On Alexander's succession to the throne of Macedonia in 336, Aristotle returned to Athens and established his school and research institute, the Lyceum. After Alexander's death he was driven out of Athens and fled to Chalcis in Euboea where he died in 322. His writings profoundly affected the whole course of ancient and medieval philosophy.

Hugh Lawson-Tancred was born in 1955 and educated at Eton and Balliol College, Oxford. He is a Departmental Fellow in the Department of Philosophy at Birkbeck College in the University of London. He has published extensively on Aristotle and Plato and is currently engaged in research in computational linguistics. He translates widely from the Slavonic and Scandinavian languages. He is married with a daughter and two sons and lives in North London and Somerset.