Agricola and the Germania (Paperback) 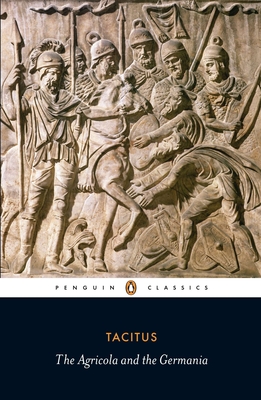 Agricola and the Germania (Paperback)


This title is likely unavailable. Email or call for price and availability.
The Agricola is both a portrait of Julius Agricola—the most famous governor of Roman Britain and Tacitus' well-loved and respected father-in-law—and the first detailed account of Britain that has come down to us. It offers fascinating descriptions of the geography, climate and peoples of the country, and a succinct account of the early stages of the Roman occupation, nearly fatally undermined by Boudicca's revolt in AD 61 but consolidated by campaigns that took Agricola as far as Anglesey and northern Scotland. The warlike German tribes are the focus of Tacitus' attention in the Germania, which, like the Agricola, often compares the behaviour of "barbarian" peoples favourably with the decadence and corruption of Imperial Rome.

For more than seventy years, Penguin has been the leading publisher of classic literature in the English-speaking world. With more than 1,700 titles, Penguin Classics represents a global bookshelf of the best works throughout history and across genres and disciplines. Readers trust the series to provide authoritative texts enhanced by introductions and notes by distinguished scholars and contemporary authors, as well as up-to-date translations by award-winning translators.
Tacitus studied rhetoric in Rome and rose to eminence as a pleader at the Roman Bar. In 77 he married the daughter of Agricola, conqueror of Britain, of whom he later wrote a biography. His other works includethe Germania and the Historiae.

J. B. Rives received his PhD in Classics from Stanford University (1990) and taught at Columbia University and at York University in Toronto before moving to the University of North Carolina at Chapel Hill, where he is Kenan Eminent Professor of Classics. He is the author of Religion and Authority in Roman Carthage (1995) and Religion in the Roman Empire (2006), as well as numerous articles on aspects of religion in the Roman world. He has also published a translation, with introduction and commentary, of Tacitus' Germania (1999) and, for Penguin Classics, has revised Robert Graves' translation of Suetonius, The Twelve Caesars (2007).

Harold Mattingley was born in 1884 and died in 1964. He is best known for his study of Roman coinage at the British Museum where he worked from 1920 to 1948. He wrote over four hundred articles and books and his Roman Imperial Civilization, first published when he was seventy-two, embodied the reflections of a lifetime devoted to the study of the Roman world.