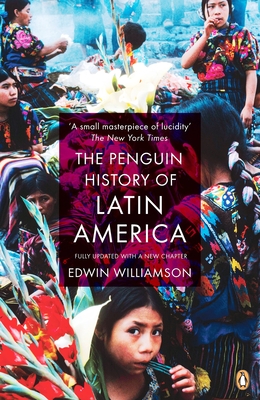 
Backordered - ETA Unknown
Now fully updated to 2009, this acclaimed history of Latin America tells its turbulent story from Columbus to Chavez. Beginning with the Spanish and Portugese conquests of the New World, it takes in centuries of upheaval, revolution and modernization up to the present day, looking in detail at Argentina, Mexico, Brazil, Chile and Cuba, and gives an overview of the cultural developments that have made Latin America a source of fascination for the world. 'A first-rate work of history ... His cool, scholarly gaze and synthesizing intelligence demystify a part of the world peculiarly prone to myth-making ... This book covers an enormous amount of ground, geographically and culturally' Tony Gould, Independent on Sunday
Edwin Williamson holds the King Alfonso XIII Chair of Spanish at the University of Oxford. He has since 2003 been a Professorial Fellow of Exeter College, Oxford. He had previously held the Forbes Chair of Hispanic Studies at the University of Edinburgh. He has held academic posts at Trinity College, Dublin and Birkbeck College, University of London and has been a visiting professor at Stanford University and the University of Sao Paulo. His most recent book is Borges: A Life.