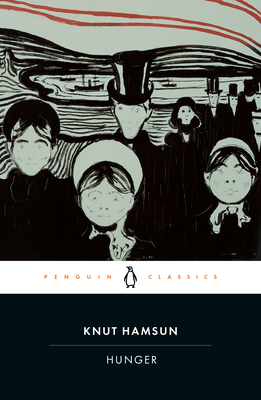 A modernist masterpiece: the Nobel Prize winner’s first and most important novel

First published in Norway in 1890, Hunger probes the depths of consciousness with frightening and gripping power. Contemptuous of novels of his time and what he saw as their stereotypical plots and empty characters, Knut Hamsun embarked on “an attempt to describe the strange, peculiar life of the mind, the mysteries of the nerves in a starving body.” Like the works of Dostoyevsky, it marks an extraordinary break with Western literary and humanistic traditions.

For more than seventy years, Penguin has been the leading publisher of classic literature in the English-speaking world. With more than 1,800 titles, Penguin Classics represents a global bookshelf of the best works throughout history and across genres and disciplines. Readers trust the series to provide authoritative texts enhanced by introductions and notes by distinguished scholars and contemporary authors, as well as up-to-date translations by award-winning translators.
Knut Hamsun (1858–1952) was a Norwegian novelist, poet, and playwright hailed by many as one of the founders of modern literature. Born to a poor peasant family in central Norway, he worked as a schoolmaster, sheriff’s assistant, laborer, store clerk, farmhand, and streetcar conductor in both Scandinavia and America before establishing himself as a successful playwright and novelist. His first novel, Hunger (1890), was an immediate critical success; he went on to write the novels Mysteries (1892), Pan (1894), Victoria (1898), and The Growth of the Soil (1917), the last of which earned him the Nobel Prize in Literature in 1920.

Sverre Lyngstad (1922–2011; translator, introducer, notes) was a scholar and translator of Norwegian literature and Distinguished Professor Emeritus of English and Comparative Literature at the New Jersey Institute of Technology. He translated five of Knut Hamsun’s works for Penguin Classics—Hunger (1890), Mysteries (1892), Pan (1894), Victoria (1898), and The Growth of the Soil (1917)—and was honored by the King of Norway with the St. Olav Medal and with the Knight’s Cross, First Class, of the Royal Norwegian Order of Merit.
By the Winner of the Nobel Prize in Literature

“Knut Hamsun’s writing is magical, his sentences are glowing, he could write about anything and make it alive.” —Karl Ove Knausgaard, The New York Times Book Review

“The whole modern school of fiction in the twentieth century stems from Hamsun.” —Isaac Bashevis Singer

“The classic novel of humiliation, even beyond Dostoyevsky . . . Lyngstad’s translation restores to the English-speaking reader one of the cold summits in modern prose literature.” —George Steiner