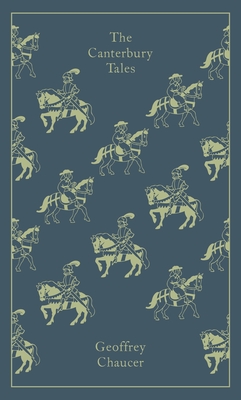 
Backordered - ETA Unknown
One of the great masterworks of English literature, in a gorgeous new clothbound edition

In The Canterbury Tales Chaucer created one of the great touchstones of English literature, a masterly collection of chivalric romances, moral allegories, and low farce. A storytelling competition between a group of pilgrims from all walks of life is the occasion for a series of tales that range from the Knight’s account of courtly love and the ebullient Wife of Bath’s Arthurian legend, to the ribald anecdotes of the Miller and the Cook. Nevill Coghill’s masterly and vivid modern English verse translation is rendered with consummate skill to retain all the vigor and poetry of Chaucer’s fourteenth-century Middle English.
Geoffrey Chaucer was born in London in about 1342. He was valued highly by King Edward III, who paid part of his ransom when he was captured fighting in France in 1360. He rose in royal employment, becoming a justice of the peace, and was buried in 1400 in Westminster Abbey.
Nevill Coghill was an English literary scholar best known for his translations into modern English.