The River Between Us (Paperback) 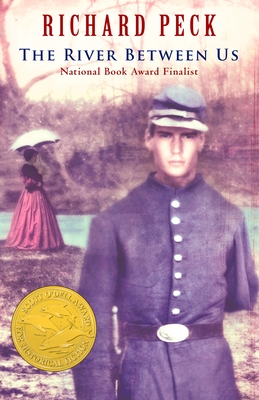 The River Between Us (Paperback)


Available in Warehouse. Wait for Email Confirmation for ETA
The year is 1861. Civil war is imminent and Tilly Pruitt's brother, Noah, is eager to go and fight on the side of the North. With her father long gone, Tilly, her sister, and their mother struggle to make ends meet and hold the dwindling Pruitt family together. Then one night a mysterious girl arrives on a steamboat bound for St. Louis. Delphine is unlike anyone the small river town has even seen. Mrs. Pruitt agrees to take Delphine and her dark, silent traveling companion in as boarders. No one in town knows what to make of the two strangers, and so the rumors fly. Is Delphine's companion a slave? Could they be spies for the South? Are the Pruitts traitors? A masterful tale of mystery and war, and a breathtaking portrait of the lifelong impact one person can have on another.

RICHARD PECK (1934-2018) was born in Decatur, Illinois and lived in New York City for nearly 50 years. The acclaimed author of 35 novels for children and young adults, he won the Newbery Medal for A Year Down Yonder, a Newbery Honor for A Long Way from Chicago, the Scott O’Dell Award for The River Between Us, the Edgar Allen Poe Award for Are You in the House Alone?, a Boston Globe-Horn BookAward Honor for The Best Man, and the Christopher Medal for The Teacher’s Funeral. He was the first children’s author ever to have been awarded a National Humanities Medal, and was twice a National Book Award Finalist.

It's a riveting story that shows racism everywhere and young people facing war, not sure what side to be on or why. (Booklist, starred review)

Historical fiction fans should enter this at the top of the must-read list. (The Bulletin of the Center for Children's Books, starred review)

The harsh realities of war are brutally related in a complex, always surprising plot that resonates on multiple levels. (he Horn Book, starred review)

Unforgettable characters and handsome prose make this book one you won't want to miss. (Children's Literature)