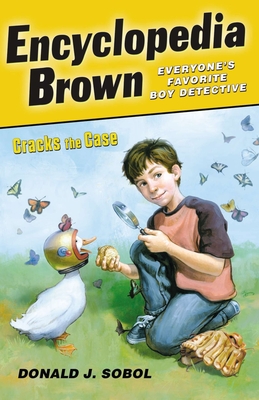 This is book number 25 in the Encyclopedia Brown series.

Leroy Brown, aka Encyclopedia Brown, is Idaville’s ten-year-old star detective. With an uncanny knack for trivia, he solves mysteries for the neighborhood kids. But his dad also happens to be the chief of the police department, and every night Encyclopedia helps him get to the bottom of his most baffling crimes. Join Encyclopedia Brown as he solves ten of his newest and most confounding mysteries, including a case of a missing butterfly brooch, some stolen Confederate stamps, a forgetful jewel thief, and more. With the clues given in each case, readers will have a chance to solve the mystery themselves! Interactive and chock-full of interesting bits of information—it’s classic Encyclopedia Brown!
Donald J. Sobol was the author of the highly acclaimed Encyclopedia Brown series and many other books. His awards include a special Edgar Award from the Mystery Writers of America for his contribution to mystery writing in the United States, and the Pacific Northwest Library Association Young Readers’ Choice Award for Encyclopedia Brown Keeps the Peace.