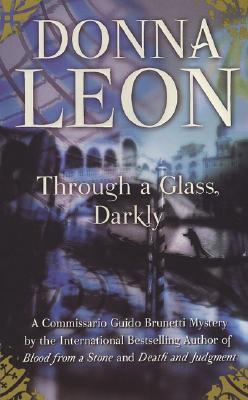 The Philadelphia Inquirer called Leon’s incomparable creation Commissario Guido Brunetti “the most humane sleuth since Georges Simenon’s Inspector Maigret.” It’s no wonder then that Leon’s legion of fans continues to grow with each new book that’s published. In Through a Glass, Darkly, Brunetti investigates the murder of a night watchman, whose body is found in front of a blazing furnace at Giovanni De Cal’s glass factory along with an annotated copy of Dante’s Inferno. Did the cantankerous De Cal kill him? Will Brunetti make the connection between the work of literature and the murderer in time?

A New Yorker of Irish/Spanish descent, Donna Leon first went to Italy in 1965, returning regularly over the next decade or so while pursuing a career as an academic in the States and then later in Iran, China and finally Saudi Arabia. It was after a period in Saudi Arabia, which she found 'damaging physically and spiritually' that Donna decided to move to Venice, where she has now lived for over twenty years.Her debut as a crime fiction writer began as a joke: talking in a dressing room in Venice's opera-house La Fenice after a performance, Donna and a singer friend were vilifying a particular German conductor. From the thought 'why don't we kill him?' and discussion of when, where and how, the idea for Death at La Fenice took shape, and was completed over the next four months. Donna Leon is the crime reviewer for the London Sunday Times and is an opera expert. She has written the libretto for a comic opera, entitled Dona Gallina. Set in a chicken coop, and making use of existing baroque music, Donna Gallina was premiered in Innsbruck. Brigitte Fassbaender, one of the great mezzo-sopranos of our time, and now head of the Landestheater in Innsbruck, agreed to come out of retirement both to direct the opera and to play the part of the witch Azuneris (whose name combines the names of the two great Verdi villainesses Azucena and Amneris).

No one knows the labyrinthine world of Venice or the way favoritism and corruption shape Italian life like Leon’s Brunetti . . . the thoughtful Venetian cop with a love of food, an outspoken wife, and a computer-hacker secretary who plays man Friday to his detective. (Time)

One of the best of the international crime writers is Donna Leon, and her Commissario Guido Brunetti tales set in Venice are at the apex of continental thrillers. (Rocky Mountain News)