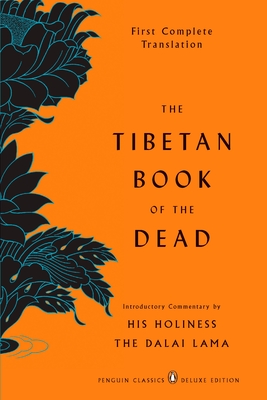 Graced with opening words by His Holiness The Dalai Lama, the Penguin Deluxe Edition of The Tibetan Book of the Dead is "immaculately rendered in an English both graceful and precise." Translated with the close support of leading contemporary masters and hailed as “a tremendous accomplishment,” this book faithfully presents the insights and intentions of the original work. It includes one of the most detailed and compelling descriptions of the after-death state in world literature, practices that can transform our experience of daily life, guidance on helping those who are dying, and an inspirational perspective on coping with bereavement.

For more than seventy years, Penguin has been the leading publisher of classic literature in the English-speaking world. With more than 1,700 titles, Penguin Classics represents a global bookshelf of the best works throughout history and across genres and disciplines. Readers trust the series to provide authoritative texts enhanced by introductions and notes by distinguished scholars and contemporary authors, as well as up-to-date translations by award-winning translators.
Gyurme Dorje (PhD) is a leading scholar of the Nyingma tradition of Tibetan Buddhism. His seven major publications include works on Tibetan lexicography, medicine, divination and pilgrimage guides to Tibet and Bhutan, as well as translations of HH Dudjom Rinpoche's The Nyingma School of Tibetan Buddhism.

Graham Coleman is President of the Orient Foundation (UK), a major Tibetan cultural conservancy organization. Writer/director of the acclaimed feature documentary Tibet: A Buddhist Trilogy and editor of the Handbook of Tibetan Culture, he has been editing Tibetan Buddhist poetry and prose texts in cooperation with various distinguished translators since the mid-1970s.

Thupten Jinpa (Phd) is the senior translator to His Holiness the Dalai Lama and President of the Institute of Tibetan Classics. His works include the translation of twelve books by the Dalai Lama, such as the New York Times bestseller Ethics for a New Millennium and The Universe in a Single Atom, the Dalai Lama's perspective on the meeting of Buddhism and modern science.

This new translation of The Tibetan Book of the Dead is a tremendous accomplishment. The whole text is a vast source of inspiration. (Francesca Fremantle, Buddhadharma magazine)

The most celebrated and widely read work of Tibetan literature outside Tibet . . . now in its finest and most complete form in this excellent English translation. (Bryan J. Cuevas, Tricycle)

Profound and unique, it is one of the great treasures of wisdom in the spiritual heritage of humanity. (Sogyal Rinpoche, author of The Tibetan Book of Living and Dying)

One of the great scripts of world civilization . . . a voyage inside the profound imagination of a people, immaculately rendered in an English both graceful and precise. (Time Out, London)

I hope that the profound insights contained in this work will be a source of inspiration and support to many interested people around the world. (His Holiness The Dalai Lama)