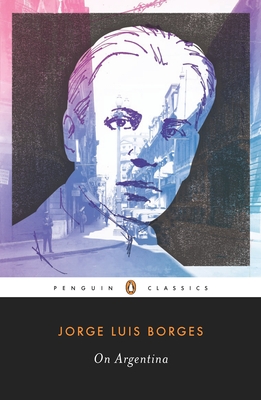 A literary guide to Argentina by its most famous writer

Jorge Luis Borges wrote about Argentina as only someone passionate about his homeland can. On Argentina reveals the many facets of his passion in essays, poems, and stories through which he sought to bring Argentina forward on the world stage, and to do for Buenos Aires what James Joyce did for Dublin.

In colorful pieces on the tango and the gaucho, on the card game truco, and on the criollos (immigrants from Spain) and compadritos (street-corner thugs), we gain insight not only into unique aspects of Argentine culture but also into the intellect and values of one of Latin America’s most influential writers. Featuring material available in English for the first time, this unprecedented collection is an invaluable literary and travel companion for devotees of both Borges and Argentina.

Jorge Luis Borges was born in Buenos Aires in 1989 and was educated in Europe. One of the most widely acclaimed writers of our time, he published many collections of poems, essays, and short stories before his death in Geneva in June 1986. In 1961 Borges shared the International Publisher’s prize with Samuel Beckett. The Ingram Merrill Foundation granted him its Annual Literary Award in 1966 for his “outstanding contribution to literature.” In 1971 Columbia University awarded him the first of many degrees of Doctor of Letters, honoris causa (eventually the list included both Oxford and Cambridge), that he was to receive from the English-speaking world. In 1971 he also received the fifth biennial Jerusalem Prize and in 1973 was given one of Mexico’s most prestigious cultural awards, the Alfonso Reyes Prize. In 1980 he shared with Gerardo Diego the Cervantes Prize, the Spanish world’s highest literary accolade. Borges was Director of the Argentine National Library from 1955 until 1973.