The Forest Unseen: A Year's Watch in Nature (Paperback) 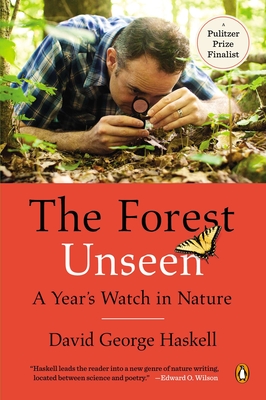 The Forest Unseen: A Year's Watch in Nature (Paperback)


Available in Warehouse. Wait for Email Confirmation for ETA
Finalist for the Pulitzer Prize and the PEN/E.O. Wilson Literary Science Writing Award

“Injects much-needed vibrancy into the stuffy world of nature writing.” —Outside, “The Outdoor Books That Shaped the Last Decade”

In this wholly original book, biologist David Haskell uses a one-square-meter patch of old-growth Tennessee forest as a window onto the entire natural world. Visiting it almost daily for one year to trace nature's path through the seasons, he brings the forest and its inhabitants to vivid life.

Each of this book's short chapters begins with a simple observation: a salamander scuttling across the leaf litter; the first blossom of spring wildflowers. From these, Haskell spins a brilliant web of biology and ecology, explaining the science that binds together the tiniest microbes and the largest mammals and describing the ecosystems that have cycled for thousands- sometimes millions-of years. Each visit to the forest presents a nature story in miniature as Haskell elegantly teases out the intricate relationships that order the creatures and plants that call it home.

Written with remarkable grace and empathy, The Forest Unseen is a grand tour of nature in all its profundity. Haskell is a perfect guide into the world that exists beneath our feet and beyond our backyards.
David Haskell’s work integrates scientific, literary, and contemplative studies of the natural world. He is a professor of biology and environmental studies at the University of the South and a Guggenheim Fellow. His 2017 book The Songs of Trees won the John Burroughs Medal for Distinguished Natural History Writing. His 2012 book The Forest Unseen was a finalist for the Pulitzer Prize and the PEN/E.O. Wilson Literary Science Writing Award, and won the 2013 Best Book Award from the National Academies, the National Outdoor Book Award, and the Reed Environmental Writing Award. His new book, Sounds Wild and Broken: Sonic Marvels, Evolution’s Creativity, and the Crisis of Sensory Extinction, will be published in March of 2022.

To listen to a collection of sounds from the trees in this book, visit dghaskell.com.
Praise for The Forest Unseen:

“[Haskell] thinks like a biologist, writes like a poet, and gives the natural world the kind of open-minded attention one expects from a Zen monk rather than a hypothesis-driven scientist.”
—James Gorman, The New York Times

“Very much a contemporary biologist in his familiarity with genetics and population ecology, [Haskell] also has the voracious synthetic imagination of a 19th-century naturalist. More importantly, Mr. Haskell is a sensitive writer, conjuring with careful precision the worlds he observes and delighting the reader with insightful turns of phrase.”
--The Wall Street Journal

“I really enjoyed—and learned a tremendous amount from—[The Forest Unseen] . . . [it] opened the world up to me in a new way.”
—Elizabeth Kolbert, author of The Sixth Extinction

“What goes on over the course of a year, in one square meter of old growth forest? Everything, to those who look. Haskell’s writing is natural history, in every sense of the phrase, at its very best.”
—Richard Powers, author of The Overstory, PBS Newshour

"[Haskell] documents the marvelous profusion of life . . . [a] magical look at the interconnectedness of the natural world, and the invisible ties that bind us together."
—The Guardian

“[Haskell's] observations--of lichens, snowflakes, salamanders, and more--are deftly interwoven with the science. His account is fascinating, whether he's stripping off in January to experience the physiological effects of severe cold, describing the symphonic sounds of trees in a high wind, or wondering at the bacteriological properties of a vulture's digestive tract.”
--Nature

“[The Forest Unseen] is a 'nature book,' and a great one, but it's also and less obviously a book about human nature. You can't read its lyrical, tactile prose without confronting the whole question of our place in the natural order, and of what we're doing here. If we want to last much longer on this planet, we'll have to learn to think differently and more deeply about those things, and Haskell can be one of our guides.”
--John Jeremiah Sullivan, author of Pulphead