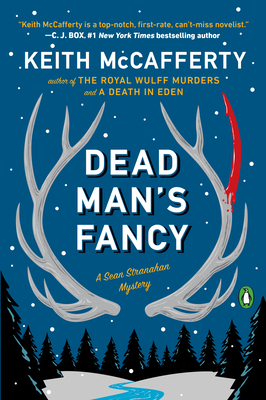 By Keith McCafferty
$17.00
On Our Shelves as of 9am Today

This is book number 3 in the A Sean Stranahan Mystery series.

Cold Hearted River, the sixth in the series, is forthcoming from Viking.

Wolves howl as a riderless horse returns at sunset to the Culpepper Dude Ranch in the Madison Valley. The missing woman, Nanika Martinelli, is better known as the Fly Fishing Venus, a red-haired river guide who lures clients the way dry flies draw trout.

As Sheriff Martha Ettinger follows hoof tracks in the snow, she finds one of the men who has fallen under the temptress’s spell impaled on the antler tine of a giant bull elk, a kill that’s been claimed by a wolf pack. An accident? If not, is the killer human or animal? With painter, fly fisherman, and sometimes private detective Sean Stranahan’s help, Ettinger will follow clues that point to an animal rights group called the Clan of the Three-Clawed Wolf and to their svengali master, whose eyes blaze with pagan fire.

In their most dangerous adventure yet, Stranahan and Ettinger find themselves in the crossfire of wolf lovers, wolf haters, and a sister bent on revenge, and on the trail of an alpha male gone terribly wrong.

Keith McCafferty is the survival and outdoor skills editor of Field & Stream, and the author of The Royal Wulff Murders, The Gray Ghost Murders, and Crazy Mountain Kiss, which won the 2016 Spur Award for Best Western Contemporary Novel. Winner of the Traver Award for angling literature, he is a two-time National Magazine awards finalist. He lives with his wife in Bozeman, Montana.

Keith encourages you to visit him at keithmccafferty.com

“McCafferty knows his country and his characters, who have a comfortable, lived-in feel and yet shine as individuals….[his] understated prose deserves to be savored.”—Kirkus

Praise for The Gray Ghost Murders

“This is a truly wonderful read.  In an old and crowded field, Keith has created characters fresh, quirky and yet utterly believable, then stirred them into a mystery that unfolds with grace and humor against a setting of stunning beauty and danger.  Stranahan, the fisherman sleuth, breaks free of the old cliche's and delights with his humanity, vulnerability and love of cats.  Yes, cats.  Keith has written a book that speaks to women and men regardless of color or background.  The only downside of this book is that we must wait a year for the next one.”—Nevada Barr, New York Times bestselling author of the Anna Pigeon Mysteries

“Even amid the serene trout streams of Montana, Sean Stranahan can’t seem to stay out of trouble—and there’s a heap of it in this bracing second adventure for the fly fisher/painter/PI… Field & Stream editor McCafferty skillfully weaves Big Sky color, humor, and even romance (in the form of Sean’s stunning new girlfriend, Martinique, who’s bankrolling veterinary school by working as a bikini barista) into the suspenseful plot as it gallops toward a white-knuckle. . . climax. The book’s biggest lure, however, remains Sean and his rugged band of Montana individualists.”—Publishers Weekly

“Think big-city CSI teams have it tough? Their examinations of crime scenes are hardly ever interrupted by a grizzly bear like the one that sends Deputy Harold Little Feather to the hospital…Irresistible.”—Kirkus Reviews

“Firmly set in the Montana wilderness and populated by well-drawn characters. This series will appeal to fans of Nevada Barr and C. J. Box as well as to fly-fishing devotees.”—Booklist